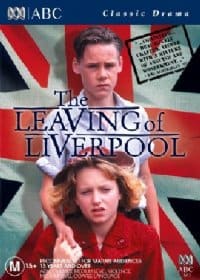 Highly recommended to me as a powerful and emotional drama, The Leaving of Liverpool became a film I was looking forward to see.

Moreover, I was impatient to see if this made-for-TV film would be good enough to compare with the best coming of age movies made for TV as outlined in a post I wrote last year. Before you go on reading the review, keep in mind that I was warned of several shocking scenes – which may make the film unsuitable for people under the age of twelve.

The film tells the story of a group of British orphans who, after the end of WWII, are send to Australia and other parts of the world that once were part of the British Empire. in an attempt to offer them a chance to start a new life amongst the so called “Commonwealth“.

The story begins at an orphanage located in Liverpool where we first observe the way the children were treated by the ones responsible for their upbringing. Strict discipline and corporal punishment were common at many institutions ran by the Catholic Church.

We are introduced to the characters on whom the film will focus. Christine Tremarco and Kevin Jones star in the roles of Lily and Bert. Both first time actors they deliver  extraordinary performances to which the film owes much of its success.

Lily is brought to the orphanage by her mother, who leaves her there with a promise to be back in six months.  Bert, who has spend most of his childhood at the institution, notices Lily’s distress and, along with his best friend  – a young deaf boy ( David Kaff ) – tries to distract the scared girl by showing her how to march. 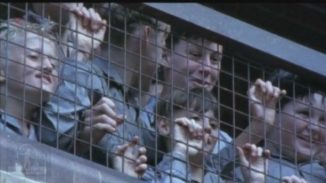 Soon the kids are gathered into the study hall for an important announcement. They are to be sent to different countries to experience “great adventures” and contribute to the educated white population of several countries such as Australia, New Zealand and Canada.

When Lily and Bert hear the announcement in the school hall, they are quite  confused by it –  Lily is scared and does not want to live in any other country, but wait at the orphanage for her mother.  Burt convinces her that it’s all just a game and nobody is going to be sending them anywhere.  That’s only logical he tells her.

Yet, it turns out that the child migration schemes are quite real and in the next scenes we observe how the kids are prepared for their “big  adventure”. They find themselves in an operating room, their tonsils being removed and next  at the harbor waiting to board a huge ship designated to Australia. Once they arrive in Australia, after a long sea trip that does not pass without accidents, the kids are separated – girls from boys, brothers from sisters – and sent to distinct parts of the country. 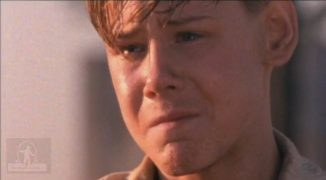 Yet, instead of being housed with a new family, or finding themselves in better conditions, the children are sent to work camps and reformatory institutions.

Separated from  the boys upon arrival, she is made to believe that her own mother signed a paper which allowed the people governing the immigrant program to send her whenever they desired.  This Australian screen website features a great overview of the film, featuring Curator’s notes and two clips from it.

The Leaving of Liverpool is based on real  events as was recently confirmed by the Australian Prime Minister Kevin Rudd who issued an apology to thousands of impoverished British children shipped to Australia. You can find an article related to this at Newser.com which is illustrated with three documentary photographs. The New York Times also has an extensive article on the subject titled Australian Leader Apologizes to the ‘Lost Innocents’ .

The film is set to a slow pace and its total duration is 205 minutes. It was first broadcast in the form of mini series back in 1992. In their reviews of The Leaving of Liverpool, many people wrote that the film touched their hearts.

Being a fan of  realistic dramas, I was expecting that my experience wouldn’t be much different. Yet, after the final credits rolled, I admitted to myself that even if the film was good and the story well told it failed to “involve me emotionally as much as some other dramas such as  The Cure  or  Song for a Raggy Boy. The film, however, is a must see for every fan of the coming of age genre as the story of Lily and Burt demonstrate the best characteristics of coming of age films focusing on the characters’ life changing experiences up to and through adulthood.

I would not hesitate to recommend The Leaving of Liverpool, but suggest that, because of its length, one is better off seeing its two parts on two separate days as this would allow for more time to reflect on the scenes in the film.

The Leaving of Liverpool (1992)
3.9
Where to get
Amazon
Previous articleZoomerne
Next articleUlterious: A Screenplay of Boy vs. Boy