Each week Jeffrey – the host of The Mystery Artist Show  on TheSkyKid.com Radio –  introduces a young artist from somewhere around the world. In March 2011, we published an interview with the teen idol Alan Wheeler, titled Alan Wheeler: Monterrey Musical Marvel!  A year later, Jeffrey contacted Alan for a follow up interview, which was aired on TheSkyKid.com radio in July, 2012.

Note: This publication is a transcription of the original interview aired on TheSkyKid.com radio. The clip included below features the whole interview and snippets of the songs that were played during the live broadcast.  In this transcript, “TMAS” will represent the questions posed by the Mystery Artist’s Show and “AW” will be Alan’s answers.  Jeffrey has also provided some post interview commentary that was not part of the interview as aired, but rather represent his impressions of the interview after the fact.  Those comments will be shown as “Jeffrey“.

TMAS:  Today’s Mystery Artist is none other than the one and only Alan Wheeler. Alan is originally from Monterrey, Mexico, but now lives in Los Angeles, California. Like so many artists before him were able to do Alan, who is fluent in English and Spanish, bridged the cultural and lingual barriers of two countries into one. Alan had auditioned for the X-Factor after he was recruited to participate in the contest. Unfortunately, he didn’t make it through, even though Simon Cowell gave him a “Yes”.

AW: Hmm. How long had I been a member of the Ruppis? Since I was eight until I was about 12, so something like four years.

Jeffrey:  The RUPPIS, an extremely popular children’s band in Mexico and the Valley of Texas, performed at a variety of venues and has its own sitcom broadcast by the TV Network Multimedios.

TMAS: After watching videos on YouTube of the group, I couldn’t help but notice that your sister Chris was also a member. Was it difficult at any time for the two of you to work together and then go home?

AW: Yeah.  My sister was also a member of the Ruppis. It wasn’t really difficult. I mean, it was just like having like another friend in the band.

TMAS: I know it’s often difficult for young people who get into singing or acting when it comes to their classmates teasing and bullying them. Have you had any problems such as this?

AW: A couple of people at school started teasing me like “Hey! So sing a song or something”. Then everybody started doing it and it got a little bit annoying, but it didn’t really affect me.

Jeffrey:  At one point in time, Ala 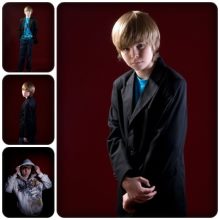 n Wheeler was modeling clothes for the Fashion Shows Runway. This raised my curiosity…

TMAS: When we think of Runway models, we generally picture tall, sexy, skinny women or buffed hunks or even female beauty contestants of all ages, but we never really think of boys. Did this ever cause any problems as far as people calling you names or anything like that?

AW: Since there’s not that many Runways in Mexico, not many people noticed that I was a Runway model.  So people didn’t really know.

AW: What I would say to young artists is to never lose your ground.  Always be as humble as possible. Always keep an eye on your dream. Never let anything come between it and you. Just be careful with people trying to bring you down. 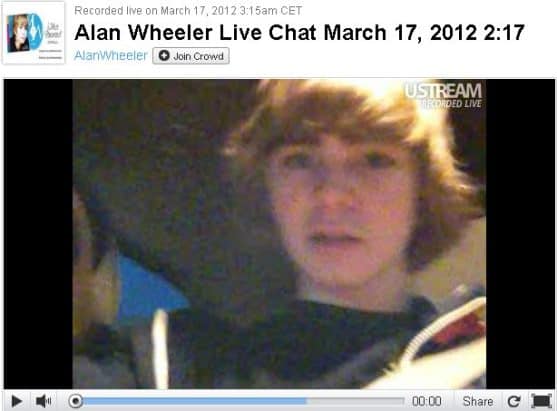 Jeffrey: Each week, Alan hosts a USTREAM.TV broadcast, during which he and his sister, Chris, interact with their fans.  Streaming media has been increasingly popular among young performers, so I had to ask what motivated him to devote his time to a weekly streaming event…

TMAS: What made you decide to start doing USTREAM broadcasts?

AW: How we started doing the Ustream broadcasts was sometimes we left Monterrey or we wouldn’t have concerts during a period of time, so people started saying things like “We haven’t seen you in a such long time”.  We found out about Ustream and we’ve been doing live chats every Friday at 6pm Pacific time, which is 8pm Central time so you can check us out there.

Jeffrey: I try my best to watch artists when they do a Ustream, vidcam or any other kind of broadcast for their fans. Alan is by far one of the artists I like watching the most —  not because of his great singing ability, but because he and his sister Chris make their broadcasts loads of fun. Even though the majority of the time I can’t understand what they’re saying because it’s in Spanish, I like watching because they make it so much fun and a pleasure to watch. From watching Alan and his sister, Chris, I can tell that there’s never a dull moment in their household.

TMAS: What is the one place in the entire world that you’d love to perform at the most?

AW: The one place in the entire world that I would love to perform at the most is probably the Hollywood Bowl, since it’s such a legendary place. Everybody has played there, so it would be an honor to play there one day.

TMAS: Has there been a release date set for your second CD?

AW: No there’s not yet a release date for the second CD, but hopefully it’s soon.

TMAS: Can you tell us anything about the CD as far as the songs that will be on it?

TMAS: Are any of them originals or covers or both?

AW: There’s going to be both originals and covers. Probably more originals than covers, because I really like originals. There’s probably going to be two or three covers on it.

TMAS: Is there anything you’d like to add before we go?

AW: I’d like to send a big shout out to all my fans and I’m very glad to be here.

Jeffrey: I’d like to thank Alan for taking the time to do the interview with me and I’d also like to thank Alan’s dad, Robert, for updating me on some of the information that I had about Alan. Be sure to keep up with Alan at any or all of the following links: