A stunning vocal extravaganza showcasing the brilliance of Louis-Alexander Desire to the incredible music of the famed piano prodigy, Simon Goodman.

Carefully guided and trained in the Bel Canto style by Maestro Bernard d’Abrera who continues to train Louis in the style of the ancients. Although the definition is gray to most, it certainly isn’t to Maestro Bernard d’Abrera who describes it as creating a pillar of sound before the soloist using the diaphragm of the lungs rather than the throaty tin sound of the mouth or throat. And when done properly, the Bel Canto style appears to be done effortlessly.

I can certainly tell you that Louis has mastered this sound and he certainly makes it sound pure without effort. I also know however that he trains daily and trains with a proficiency, that only come with experience and the proper tutelage.

This brilliant compilation of songs from various composers ranges in time from the 1500s through today showing that the distinctive Bel Canto form works with many styles of music and is in fact timeless in its ability to add beauty and depth to any song of substance.

This CD has sixteen tracks of some of the most beautiful Bel Canto voice ever performed and I don’t think the songs listed are that makes it beautiful. I think that can only be credited to the talents and vocal fortitude of Louis-Alexander Desire. 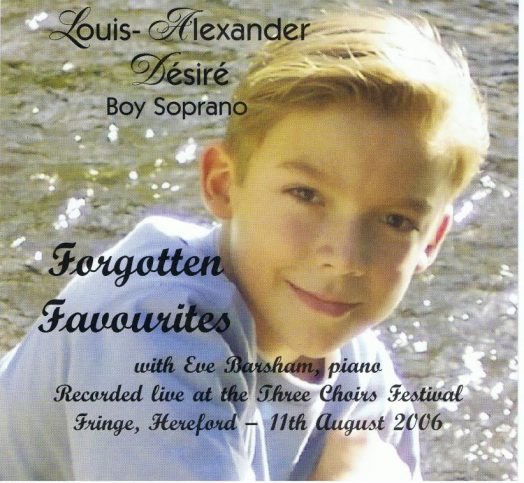 Louis just thirteen last May is in vocal prime and shows no signs of his voice breaking. He is getting ready for the release of Vox Angeli’ second CD. Hopefully, we will see at least one more, full solo CD by Louis in the Treble range. When you have a treble with such extraordinary talent you want to get every not and preserve it for posterity. This CD set a whole new bar of achievement.

Like many, I wait patiently for the second Vox Angeli CD to be released.

However, in the way of treble soloist CD’s, I have not been this impressed since Louis-Alexander Desiré produced his “Forgotten Favorites” CD.