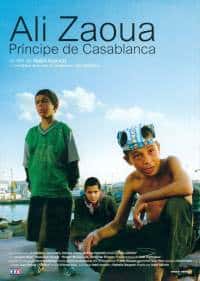 Childhood in the streets is a  theme not too often shown on film and, when it is, the documentary format is the one most frequently chosen by film makers. An example is the 2001 film Children Underground.  Another frequently used approach is to film the story, not with professional actors, but with people willing to act as themselves – real street kids acting in front of the camera, giving viewers a glimpse into their world – into their daily lives.

Ali Zaoua: Prince of the Streets is a coming of age drama that tells the story of a group of street urchins living  on the streets of Morocco’s largest city – Casablanca. These children do what they have to in order to survive.  They steal, they hustle and they beg on the streets.

The film is named after one of the kids, Ali, who dreams of escaping the harsh realities of living on streets by becoming a sailor. He convinces his friends – Kouka, Omar and Boubker to leave the gang they belong to and move to the seaport. The other members of the band are not too happy that someone dared to disrespect their gang by leaving it.  Lead by their leader, a cruel bigger boy, the gang attacks the four friends with stones. The attack has a tragic outcome – Ali’s death. The gang runs away while the remaining three boys decide to find a way to bury their friend, which is not an easy task for kids who don’t have anything to eat, no place to sleep and are in constant danger of again being  attacked by the gang.

After reading the film’s synopsis and some reviews of it, I was convinced that I was about to see a powerful and touching drama. In my mind I made  associations with the Hector Babenco’s film Pixote and the 2002 film City of God.  But alas, though the premise was promising, the story failed to move me.

As a foreign film, Ali Zoua is bound not to appeal to everyone.  But having in mind that I have a lot of foreign films in my DVD collection, I was willing to give it a chance.  That I was disappointed in this film is the result, I believe,  of the way the characters were introduced and developed throughout the story.  That’s the reason I did not fully understand their motives and the story itself.

To me, the movie doesn’t live up to its full potential was not the fault of the child actors – they delivered good and sincere performances in front of the camera. It was also not the directing or the film’s cinematography, which did a good job of mixing reality and fantasy  – of portraying the kids’ lives and dreams.  No.  To me, the biggest flaw of the film is its  underdeveloped script, which resulted in a weak narrative. Yet despite the predictability of the story , the film did not bore me and succeeded in giving me some food for thought .