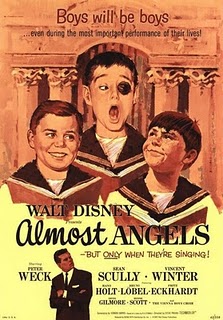 Have you ever been to a choir concert ?

Nothing can substitute for the experience — no recordings or movies – yet the 1962 Disney production Almost Angels comes close. The film is filled with wonderful treble music performed by the world famous Vienna Boys  Choir and the Vienna Symphony Orchestra. Saintly solo performances, beautiful cinematography, breathtaking scenery and a touching story add to the immense musical and inspirational value of the film. Directed by Steve Previn,  Almost Angels is one of the few films that focuses entirely on boy choir music.

The protagonist of the film is the entire choir. The boys featured in the film were a combination of Disney child actors and actual members of the Vienna Choir Boys at the time the film was shot. In the main storyline of the movie,  we follow the adventures of a young boy, Tony (Vincent Winter), who sees the boys returning from a concert they held in the USA and, inspired, he convinces his mother to take him to an audition. There, he proves to be extraordinarily talented, but his father is a working class man who wants his son to study hard and prepare himself for a “serious profession”. Even if the topic is different (singing vs dance), I would not be surprised if this film influenced the more recent Billy Elliot and Love and Dance, as all three films show us how meaningless the stereotypes can be when one is willing to express himself and chase his dreams.

Eventually, Tony joins the choir and, from that moment on, the viewer is allowed to get an insight into the daily life of the Vienna Boys Choir. Friendship, jealousy, inspiration and playfulness – nothing is left out as we observe the interaction of Tony with the rest of the choirboys. Boys will be boys and their choirmaster brilliantly describes it while saying:

“I don’t expect you to be a flock of angels, even if you sing like them”

Later on, the film inspired a Vienna Boys’ Choir commercial for Football Championship 2008:

Almost Angels also shows the emotions of the relatives and the friends of the choristers.  Parents most always are proud of their kids. Attend a choir concert in your local community just once, and you will see these people – fathers, mothers, grandparents — beaming with pride. Perhaps first outside the concert hall, chatting about the miracle that is about to happen, then everyone enters the hall and is carried away by the youngsters (who sometimes give a secret wave or a smile of acknowledgment to someone in the audience).

The film also raises some well known issues related to  boy choirs – such as voice change and its effect on the young singers. (The DVD of Le Monde des Choristes also features a short film titled Un peu de Fièvre that focuses on voice change, which naturally occurs to all youngsters as they grow up).

Here’s a brief clip from Almost Angels, portraying part of a concert given by the Vienna Boys Choir:

I haven’t ever been in a choir, but I adore choir music and happen to know several choristers from choirs in several countries (though sadly none from the Vienna Boys Choir). The film is very inspirational and is guaranteed to light the desire in any youngster to audition for a choir.  If they are accepted into one, they’ll surely see how rewarding singing in one can be. Almost Angels is one of the most inspirational films I have seen.  I recommend it to any young singer – regardless of the genre in which he/she performs. This is one of the best films ever produced by Disney and it’s a prime example of a family flick filled with values and inspiration.

The excellence of the film helped it achieve a status of “Classic” and many sites around the globe feature additional information about it, with production photos and video clips. If you are interested in  finding out more about Almost Angels, please visit this fan page at AlmostAngels.org