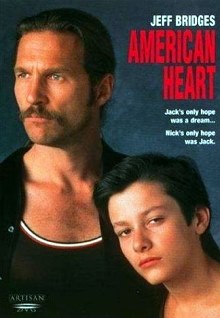 There are many reasons to watch Martin Bell’s American Heart (1992). A philosophical drama with Coming-of-Age nuances, the film focuses on the hardships of life by telling the story of Jack (Jeff Bridges), a recently released convict, and his teenage son Nick (Edward Furlong).

Jack has a history of juvenile delinquency (evident from his own words and the occasional flashback), yet after serving a sentence in prison is finally ready and willing to set his life back on track. Nick never really knew his father, but now that he has managed to track him down, he is determined to change that. Unfortunately for him, a kid (and the related responsibilities) is not included in Jack’s vision of his future life.

The rock-strewn relationship between a father and a son is central to the film’s narrative. As the two of them get to know each other and learn to accept their differences, their relationship painstakingly develops. In the toughest of times, Jack’s criminal partner from the past enters the picture — looking for an accomplice for the robbery of a jewelry store. It all comes down to making the right choices …

You may recall Edward Furlong’s 1991 breakthrough performance in the role of young John Connor in one of the best sci-fi action thrillers ever made – Terminator 2: Judgement Day. A year later, he was to deliver an immaculate performance in American Heart — in the role of a tough kid who was yet to learn the importance of being street-wise. Of course, having Jack as a role model/father figure doesn’t make things any easier for him. Jeff Bridges’s performance is top-notch as well – one can sense the anguish of his character, his toughness, and weaknesses by observing his choices and attitude.

I did not feel an emotional connection to any of the characters, but this did not lessen the experience. On the contrary, the distance between viewer and characters contributes to the authenticity of the film’s narrative. Most of the action is set in Seattle and we evidence the gritty daily fight of survival of its underprivileged inhabitants: drugs, violence, prostitution and robberies. A shocking yet genuine portrayal of the street – likely influenced by a documentary on the homeless kids of Seattle directed by Martin Bell some years prior to his work in American Heart.

The soundtrack features songs by John Lee Hooker, The Pointer Sisters, Tom Waits and Joan Jett & The Blackhearts. The songs work well with the story’s settings and help to place the viewer in the proper mood. It’s predominantly a bluesy, harsh sound, which reinforces the tough life of the protagonists. The lyrics and the mood of the final song playing while the credits roll are also well-chosen.

A drama, a character-study – you can think of the film as either — and if you are interested in Coming-of-Age narratives you will enjoy American Heart. The plot, though not that original, has a story that is told and acted very well. If you wish to compare it with other films with similar narratives you may refer to Joe The King (1999), starring Noah Fleiss, and Criss Cross (1992 ) starring David Arnott.

Pay attention to the opening sequence as the picture slideshow gives away intriguing insights into the characters’ backgrounds (it took me a repeat viewing of the film to note that). The black and white stylization of the flashbacks throughout the film is a nice touch to the already good cinematography and camerawork.

I don’t have anything negative to say about American Heart, and that’s why it gets my wholehearted recommendation.

American Heart (1992)
In short
American Heart is a Coming-of-Age drama that should be seen for the acting. It has my highest endorsement as a story of love and redemption.
3.8
Our rating
Facebook
Twitter
WhatsApp

American Heart is a Coming-of-Age drama that should be seen for the acting. It has my highest endorsement as a story of love and redemption.American Heart (1992)
TheSKyKid.comYoung talent in the movies and the arts