“A masterpiece…shocking in the best sense of the word” (L.A. Times).

At first I did not think that the movie will be interesting. But I soon changed my opinion. The fact that the movie is in black and white makes it even more appealing than if it was in colour. The action takes place in a boarding school located in France. Actually the scenes from the dinning room reminded me of the movies for Harry Potter.

The main characters are Georges de Sarre – 16 years old student and the young Alexandre (age 12) who is a student at the same school. Their friendship is really beautiful – and heart touching. It sure brought some old memories too. 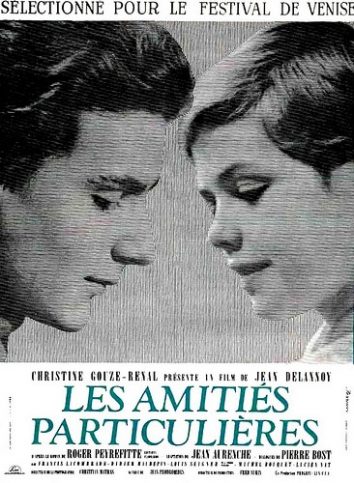 There is a lot of poetry in this movie – it seems that I am getting hocked to poetry- again! Few years ago there was a girl who was sending me sonnets of Shakespeare. I even tried to write some poems myself.
I still haven’t finished watching the movie – it turned out to be on two CDs and I only got one of them, but will get the second one soon- then I will complete this review.

I have finished watching the movie and its ending made me sad – sad and disgust. Disgust that there are such people who refuse to accept that a true, special friendship can exist and interfere – to hurt everyone, but their pity selves. And do I know of such people – because they are not only shown in the movies you know – they lurk amongst us – trying to make the rest believe and thing what they do – such people really disgust me….

Les amitiés particulières is based on 1943 novel by French writer Roger Peyrefitte.The novel is largely autobiographical.While on the set of the film, Peyrefitte met the 12-year-old aristocrat Alain-Philippe Malagnac d’Argens de Villèle, who had been cast as a choir boy and was a big fan of the book.