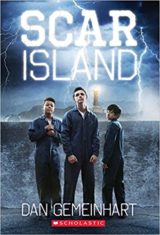 Twelve-year-old Jonathan Grisby is in a big trouble. Sentenced for a horrid crime, he is on his way to a reformatory school. And not just an ordinary one, but an ancient crumbling dark and foul place — an old crumbling fortress located on an isolated island. The school for young boys (or perhaps better said: “prison”) is run by an evil man who calls himself “The Admiral” and, together with his equally crooked staff, abuses his youthful charges on a daily basis with the excuse that he’s trying to reform them for the better and save their souls from evil.  When a freak accident takes the lives of all the adult staff, the boys find themselves alone on the island. Yet their newfound freedom brings unexpected danger.

Author Dan Gemeinhart manages to maintain the suspense level in his novel by withholding pieces of important information, such as the nature of the crime that sent Jonathan Grisby to the Slabhenge Reformatory School. We witness the guilt ridden sorrow of the troubled boy, and can’t help but wonder if he will ever be able to find redemption.

It can be a bit challenging to place the action in the right time period. Because of the story’s nature, one may initially feel it is set in the Victorian Age, such as Dicken’s Oliver Twist, or perhaps in the early 50’s like William Golding‘s Lord of the Flies. Yet, at other times, the story feels quite contemporary.

But the inconsistency of time does not ruin the reader’s experience, mainly because one develops a true interest in the characters. The young Jonathan Grisby is an intriguing main protagonist and, as his character develops, one begins to understand his motives and even perhaps begin to admire him — despite his shortcomings. Unfortunately, not all the characters in the novel are as well developed. An exception is another young boy named Colin, “a sneaky, sneaky thief” as he calls himself, with whom many readers will greatly sympathize, especially if one chooses the audio version of the novel. Hearing Colin’s lisp becomes a defining trait of his character, in quite an adorable manner.

Scar Island is a dark and compelling Coming-of-Age adventure and I really enjoyed it. Clearly inspired by Lord of the Flies, its narrative is fast paced and engaging, while the way in which the settings are described really helps one to feel the atmosphere of this God forsaken prison. Recommended!