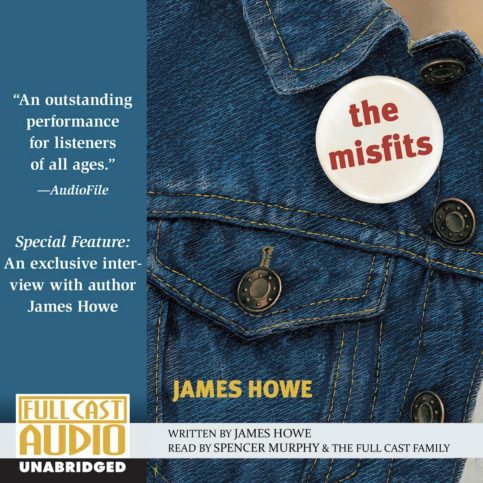 The Misfits by James Howe tells the story of four best friends in the 7th grade who try to put an end to name calling in their middle school. The “ Gang of Five“, as they call themselves, is as compelling as its members: a smart, outspoken girl passionately aiming to put an end  to world injustices, a gay middle-schooler confident and happy with himself, a kid whose fashion choices, personal hygiene and attitude have him branded as a school hooligan and last, but not least,  the slightly overweight go-along-to-get-along Bobby. And if you wonder why they are called The Gang of Five when they are just four, here is the explanation in Bobby’s words:

Kids who get called the worst names oftentimes find each other. That’s how it was with us, Skeezie Tookis and Addie Carle and Joe Bunch and me. We call ourselves the Gang of Five, but there are only four of us. We do it to keep people on their toes. Make ’em wonder.

James Howe wastes no time introducing Bobby, the young boy who will be narrating the story directly to the readers. This peculiar manner of storytelling makes the reader feel as if Bobby is a friend of his (hers), making sure that we are up to date with the latest happenings in Paintbrush Falls Middle School.

Sometimes Bobby may appear as naive, at other times he appears wise beyond his years. But not even for a moment does he sound false on account of the fact that it is an adult author who is putting the words and thoughts in Bobby’s mind.

While this may not be the best revelation about my own personality, Bobby’s observations about girls, love and everything related is just how I feel in this day and age – and at more than twice his age.

James Howe discusses being a “Misfit” with interviewer Tim Podell

So engaging is the story, that following the action and getting to know each of the characters along with their unique traits, quirks, and personalities becomes a real wholesome experience. The novel undoubtedly fits in the Coming-of-Age genre, and that is not just because of the age of its protagonist. Bobby learns about himself and life by observing the people around him, sometimes coming to not too pleasant conclusions such as:

“I know about Mr. Keller-man and even my own father gets me to wondering if “not a happy person” is part of the definition of “adult.”

Before purchasing the book, I enjoyed its audio version – thrilled by the fun and professional recording by many young artists whose voices and vivid performances brought their respective characters to life. There are a lot of humorous happenings or thoughts in the book as it is and, hearing them in such a lively manner, significantly boosts the story’s entertainment value.

Recommended for anyone aged ten and up, The Misfits by James Howe is a great read with a lot of positive, inspirational and empowering messages embedded. I have read some critiques that expressed concerns related to the sexual orientation of one of the characters and the fact that it is not addressed as a problem. I believe that such critiques have missed the point completely, as The Misfits read by preteen readers, is guaranteed to make them better human beings. I don’t hesitate to recommend the book and am sure of your enjoyment reading it.

Get the Book at Amazon.com