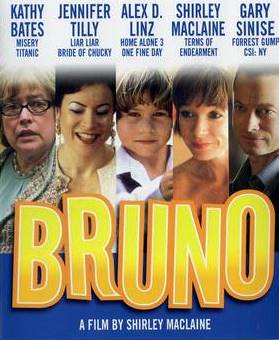 With the naivety and exuberance of childhood comes an innate understanding of the truth within one’s self.  The child’s predominant personality force is his Id, the other side of the superficial human façade that most experienced adults are able to control.  With his ability constantly tapped into the extremes of his personality, a child may fall prey to obvious ridicule in a society that forces us to fold into ourselves and forget our innate desires to feel good.

Then there was The Dress Code.

Originally entitled Bruno, The Dress Code, this movie follows the life of a precocious wonder child, Bruno, as he deals with aggressive bullying from his peers and teachers, the absence of his father, and the (understandable) over-protection of his mother.  Bruno, played by Alex D. Linz, attends Catholic school and has a particular capacity for the English language.

The most important aspect of Bruno’s story is his connection with everyone around him.  His mother (Stacey Halprin providing the emotional epicenter) is morbidly obese, a condition brought on by the trauma of her husband (Gary Sinise) leaving her for a younger woman and essentially making her a single parent — having a son whom the father rarely visits.  His mother’s obvious weight problem proves to be the biggest factor that demonizes Bruno in his school amongst, not only by the violent bullying at school from bigger boys, but also because of the disgusting flex of authority from Mother Superior (portrayed by Kathy Bates).

However, the crux of the story isn’t the bullying, Bruno’s unparalleled academic prowess, or even the emotional avalanche that is his obese mother.  Bruno has a special interest in wearing dresses.  He calls them “holy vestments”, garments worn to portray divine beauty and majesty.  His argument is that some of the most powerful and influential men in the world wear dresses and cites the cultural significance of wearing dresses, from South African cowboys to the Pope himself.  However, his style of dress (no pun intended) really allows him to express his own sense of power and self worth.  His desire to wear dresses is a way to hide the pain that is the daily deluge of his life.  He also claims that his dresses give him the courage to stand up to everyone who would seek to harm him.

Along the way he meets another social outcast, Shawniqua (played with surprising emotional depth by Kiami Davael), a Black transfer student with tomboy tendencies (wearing a cowgirl outfit complete with hat and fake pistols) and a penchant for fighting anyone and everyone who attempts to exercise superiority over her –including her White peers (Bruno’s tormentors) and Mother Superior.  Her outer strength is used to hide the pain of an abusive father and an absent mother.  Together, Bruno and Shawniqua  form an unconventional bond that sees them lift each other up to rise above the tumult of their circumstances.

Following a series of emotional events (Bruno’s mother being accosted by his emotionally disturbed tormentors and having a heart attack, and an emotional discovery that his father’s outward disgust for him correlates to a misguided self-loathing),  Bruno gets an audience with his biggest influence, the Pope.  He wins a national spelling bee (wearing a new dress everyday that his seamstress mother created for him). 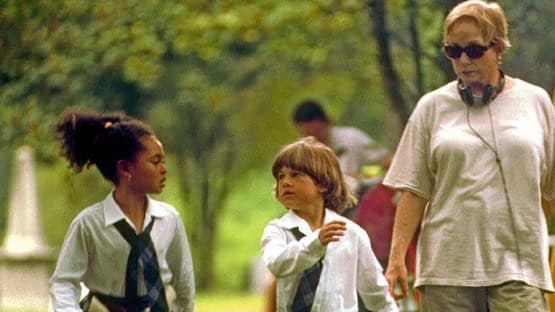 Throughout the film, we see how one boy’s understanding of his identity leads him to conquer the snide remarks, violent outbursts, and the heartbreaking disdain of his father.  His brilliant sense of self allows his mother to move towards bettering herself, allows Shawniqua to be at peace about her circumstances, and allows his father ( in his late 30s) to learn to accept himself in the same way that his son has managed to at 10 years old.  It’s obviously a coming of age film about social acceptance.  But it also rings true as a story about a child’s ability to know himself within and without, being fearless in the face of dangerous odds.  Though not an incredible film, it’s brave enough to explore a child’s emotional depth and manages to get that emotional depth from its characters, especially its underage cast.

This review of  Bruno (The Dress Code) is a guest contribution by Camiele White. As unexpected as her path was to loving all things weird, more unexpected is her ability to get attention for writing about the stuff.  From Japanese horror and Korean melodrama, to the acid soaked animation of the 70s, Camiele White loves to talk about, debate, and watch film that teases, pleases, and messes with the senses.