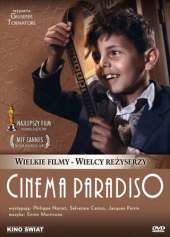 Cinema Paradiso tells the story of Salvatore, also known as Toto to his family.   The movie begins as Salvatore, now middle-aged (played by Jacques Perrin), is returning to his hometown for the first time in years to attend the funeral of the man who encouraged his love of film. This allows the film to freely, without any encumbrance or having to make any excuses, go back in time and tell our protagonist’s story. During the recounting of that story, the film flashes back to Salvatore’s childhood, at three different ages.

The first flashback shows him as a child being fascinated by film, bugging Alfredo (Philippe Noiret), the local theatre’s projectionist, about getting into the booth. The story eventually progresses to Alfredo embracing him as an apprentice. Also, as Toto becomes a teenager, he falls in love and, as he pursues his goal, he is encouraged to leave home and never look back — which makes his return and reminiscing in his middle-age even more poignant.

As I noted in my article titled Top 20 Film Titles of All-Time, the title of this film is incredible and encapsulates a lot of what the film is about. It is very much about how its protagonist believes there’s nothing better in the world than film — not only as an art form, but also because of what it got him: a best friend and it took him away from home, to a job and a purpose in life. However, Cinema Paradiso also refers to the theatre itself, as that is its name. It is a kind of heaven on earth for our protagonist and all those who love film. Surely, in watching this film, one can equate it to the movie houses we frequented in our own youths.  Whether or not those theatres were as beautiful or as storied as Cinema Paradiso is another matter.

Cinema Paradiso manages the rare feat of being not only a testament to the majesty of cinema, but also a great film in its own right — for this film becomes sort of a parable for life.  In and around the theatre there is life, love and death and there’s hope in the face of oppression exemplified by the montage saved by Alfredo which Toto witnesses at the end. You can watch it in the clip below, but I’d recommend not doing so unless you’ve seen the film.

The film, of course, is also a great love story — the wonderfully rendered tale of the girl of Toto’s dreams and their relationship. The fact that it’s such a shift in tone from the rest of the film, and yet manages to tug on your heartstrings, is amazing. But, of course, it is also a love letter to the cinema. Lastly, the film is also about friendship. To work on these three levels (romance, friendship and a more cerebral passion) is very hard and this film does it so well.

Another thing this film does very well,  is it ages its lead well and dedicates sufficient time to him in each portion of the story. My experience is that is an incredibly difficult thing to do in coming-of-age tales. Typically, in a film that goes from childhood to adolescence, the balancing act is off.  But in Cinema Paradiso, Salvatore Cascio (Toto as a child) and Marco Leonardi (Toto as a teenager) each have their moment and their impact on the film.

Cinema Paradiso is an all-around great film that works on many levels and is a cornerstone coming-of-age film that can illustrate to other filmmakers of the genre how it should be done. It is a film you should see (http://www.examiner.com/movie-in-wilmington/14-movies-everyone-should-watch).

The review of Cinema Paradiso was received as a guest article and entry in the 1st theSkykid.com Coming of Age Film Review Contest. Its author, Bernardo Villela is  a writer, director, editor and film enthusiast who seeks to expand your movie-watching options. You can find him at:  http://themovierat.wordpress.com
Share
Facebook
Twitter
WhatsApp