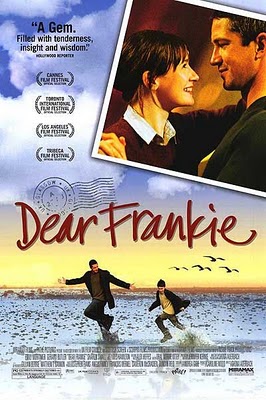 After having responded to her deaf son’s numerous letters in the guise of his father, a woman hires a stranger to pose as his dad.

Dear Frankie is an interesting little story and a true example of the coming-of-age genre.

Although a little polished at times, the real beauty of this film lies with its heart. It’s a fantastically displayed family drama and one that has some really nice moments. As I was watching this film, I thought the ending was going to be somewhat predictable and I had in my mind what I thought exactly was going to happen. The great thing was, that it didn’t pan out that way. In fact, the ending is quite open to interpretation and I think it was a perfect way to conclude this film.

The acting is superb. Emily Mortimer is brilliantly realistic as the mother (Lizzie) and really shows some raw emotions at times. Gerard Butler was great as well in his role as the Stranger. But the real stand out is Jack McElhone who plays the young boy, Frankie. He dosn’t talk during the whole film, a daunting challenge for any child actor. When dialogue is not being used, everything emoionally must be displayed with expressions. I reckon it would be difficult to find an adult actor to pull off the natural performance that Jack achieved.

It’s a shame the director, Shona Auerbach, only made this one film. There is no record of her making another film after Dear Frankie was released six years ago.

Overall, a great little Scottish film, with some cliche elements, but with a great outcome.