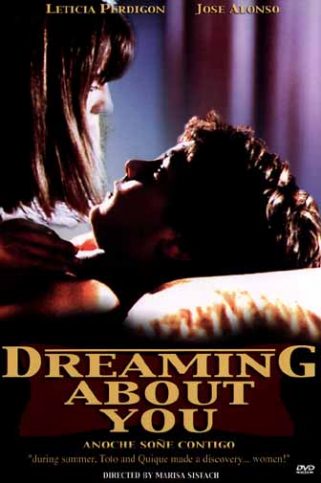 Dreaming about you is one of the theme movies of the coming of age genre. It is a Mexican movie and is know better with its original name Anoche Sone Contigo. The film is released in 1992 and has the unique atmosphere typical for the films from that time period.

The main protagonist is a 15 years old boy named Toto (Martin Altomaro) who is interested in the things most boys his age are. He hangs around with Quique – a friend of his and while they are not riding their bicycles around the neighborhood they talk about women and use their parents binoculars to spy on the maid that works in the Quique`s house as she undresses in the evenings.

The movie is quite enjoyable to watch as it is guaranteed to bring many memories . Indeed we have all passed trough this period  – whatever you choose to call it puberty or coming of age .  I laughed quite a bit as I remembered myself  being 12 or 13 hiding with the boys from my triathlon team  trying to sneak a peak at the girls dressing room. We were quite successful until our trainer caught us – well some of us – a friend of mine were fast enough to climb on the nearest tree so he did not see us.

Back to the movie – Toto`s dreams are about to become true when his older cousin Azucena (Leticia Perdigon) moves to live with him and his mother. He first sees an old photo of her on which she is about 10 – so naturally at first he is quite annoyed by the fact that she would move with them – but that changes quickly when he sees her all grown up. She eventually teaches him a lot of things – love , lust and even intimacy.

Anoche Sone Contigo features some nudity , but nothing tasteless and I thing teens would enjoy it as it will be easier for them to associate with  Toto.  Women cold also enjoy the film as it on its own is a sneak peak in the male`s coming of age.