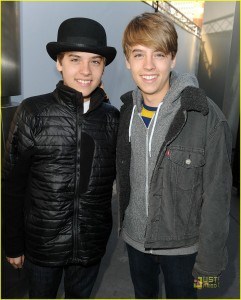 Dylan and Cole were born August 4, 1992 in Arezzo, Italy to American parents, Matthew Sprouse and Melanie Wright. Dylan was born first, then Cole fifteen minutes later. Dylan was named after poet Dylan Thomas and Cole was named after Nat King Cole.  Shortly after birth, they moved back to their parents’ home in Long Beach, California.

The twins first appeared on TV in a diaper commercial at age six months sharing the role. They have shared roles many times when they were younger. Sharing roles is very common among twins. A perfect example is Kate and Ashley Olsen from Full House. Then, at eight months old, they appeared in their first TV series called Grace Under Fire on ABC -TV, from 1993 til 1998 as Patrick Kelly (shared). In 1999, they appeared in their first major movie, Big Daddy, starring long side Adam Sandler. They played the part of  five-year-old Julian.  This is a great movie and a must see. In this movie, Cole played most of the speaking parts and close ups, while Dylan played the gross parts (vomiting and peeing — those kinds of things). They were nominated for several awards for their acting in the film.

After Big Daddy, they didn’t do a great deal, just making occasional appearances in various TV shows. But that break from being in front of the camera was to be brief. In 2000 they were back, appearing in The Nightmare Room , That 70’s Show and Mad TV (season four) and in the feature film The Master of Disguise. They also did voice over work in Adam Sandler’s Eight Crazy Nights.  In 2002 and 2003 they both appeared in I Saw Mommy Kissing Santa Claus, playing the part of Buddy, and in  Just for Kicks as Dylan and Cole Martin. In 2004, they were in the movie The Heart Is Deceitful Above All Things playing Jeremiah.

In 2005, they got their big break when they were cast in the Disney Channel series The Suite Life of Zack and Cody. The sitcom was created by Danny Kallis and Jim Geoghan the premiere was seen by four million viewers, making it the most successful premiere ever for the Disney Channel to that point. They would go on to film a total of 87 episodes of the sitcom.  Growing up as twins on the show, they were hilarious,  playing off each other very well. The sitcom is set in a hotel where their mother, Carey, sings. While living there, the two boys are forever the cause of a lot of mayhem for the hotel manager, Mr. Moseby.  In 2008, a sequel to The Suite Life of Zack and Cody, called Suite Life on Deck began and for which 54 episodes were made.  In the sequel, they attend school on board the USS Tipton and their crazy antics continue aboard ship. I have seen all the episodes from both series and I have laughed through them all. I encourage anyone who has never seen the show to look it up. It is shown in 44 countries. For the two series,  combined,  138 episodes were made, again making Disney Channel history with Dylan and Cole becoming the longest running continuous characters on the channel. While doing  the original series, Dylan and Cole also made two movies, The Prince and The Pauper (this is a great movie) and The Kings of Appletown. The latter film, while getting great reviews at its premiere, has yet to be released.

The twins have a dog named Bubba. On Suite Life on Deck you can often find a photo or the dog’s name somewhere in the background  — just a bit of trivia for you. Dylan and Cole have been involved with ventures other than  TV. They got involved with Dualstar Entertainment Group (which is owned by Kate and  Ashley Olsen) which produced Sprouse Bros. brand merchandise clothing, comic books and a magazine called Sprouse Bros. Code, launched in 2006 . In 2007, they began writing their own books titled 47 R.O.N.I.N, which featured them as young James Bonds. The clothing line, which was sold in surf shops, is now on hold but can still be bought online.

Dylan and Cole, while being major celebrities, try to keep a down-to-earth lifestyle,  mostly hanging out at home playing video games. They do enjoy a number of other things such as skateboarding, snowboarding, drawing and writing a comic strip called The Adventures of Tibblebu and Thumbin.

These guys have been the perfect duo, but sadly, it is soon to come to an end (temporarily I hope). When Suite Life on Deck ends, they will be leaving Disney. In the fall of 2010, they will head to New York to attend New York University with Dylan majoring in studio arts and Cole in film. With their crazy antics ending soon, hopefully, there will be some great things coming from them after graduation. I have seen almost everything these boys have been in and they have made me laugh for all these years. Although I can watch in syndication, I will miss them….