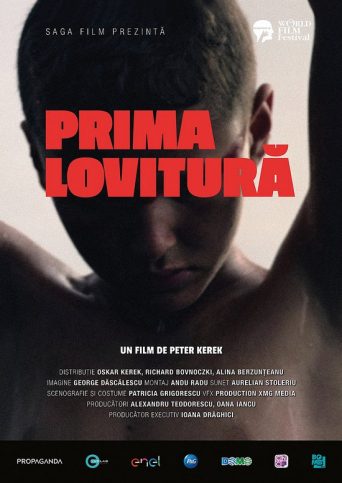 “On an empty country road in the ’80s Romania, a little boy’s imagination runs faster than death.”

Beautifully shot, the Romanian short film First Strike (original title: Prima Lovitura) offers a puzzling and enigmatic narrative. The action takes place on a lazy Sunday afternoon in the middle of the summer, opening with a ten-year-old lad (Oskar Kerek) daydreaming on the backseat of a family car during a road trip.

High up on a tree, another boy observes the passing car. His appearance, surprisingly similar to the boy inside the vehicle, changes the audience’s perception. From this moment on, the focus gets shifted to this new character and his dangerous ventures. Wearing face paint and wielding a stick shaped like a spear, this new character looks like a tribal warrior on the warpath. And, for a moment there, one gets the feeling that the filmmaker’s primary goal is to showcase that intertwine between imagination and the reality of childhood.

Yet, as is often the case in a short film narrative, there is a deeper meaning infused into the story, which is revealed in the final scene. The film’s director relies primarily on visual storytelling. There is no dialogue, and the musical score (predominately comprised of piano pieces) is minimal.

The enigmatic nature of the narrative is the best feature of the film. Complete with skillful camerawork (you will note intriguing high vantage shots) and a moody atmosphere, it’s a suitable choice for anyone appreciating the short form in the Coming-of-Age cinema.