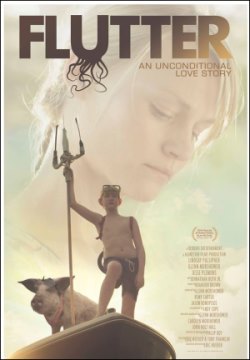 Throughout the years, I have always argued that Coming-of-Age is a process that is not necessarily tied to a specific age range. People go through life-changing processes in distinct times of their lives and often come out bruised, changed or liberated as the result of happenings and experiences.

This argument can be brilliantly substantiated by watching Eric Hueber’s 2014 movie Flutter. In it JoLynn (Lindsay Pulsipher), a young mother and her nine-year-old son Jonathan (Johnathan Huth Jr.), struggle to navigate life after the boy’s father departs on a self-discovering journey — leaving them to fend on their own.

Jonathan suffers from glaucoma, which, left untreated, could cause permanent damage to his eyesight. Expensive treatment is not an option, and JoLynn is forced to secretly grow marijuana (illegal in Texas where the action is set) and then mix it in with brownies to help alleviate the higher-than-normal pressure in Jonathan’s eyes.

That is enough to provide a unique twist to the story, but it’s the boy’s pet pig Wee Wee and their joint adventures that most people would find wickedly entertaining.  After all,  who can resist a piggy rodeo — especially one set in the Cowboy mecca of Texas?

Flutter has an indie feel to it — thanks to the subject matter and the way it’s presented — and to the musical score. The latter is accurate because it’s essentially part of the narrative itself, as the music is performed by Jonathan’s father who is more talented as a musician than responsible as a parent. Indeed, parenting (its responsibilities and challenges) is a central theme of the film. The cute scenes with animated sea monsters, representing Jonathan’s fantasy world, nicely contrast the wonder world of childhood with “real life” and its trials.

While the story failed to draw any strong emotions in me, it’s entertaining — unusual for such a gritty narrative. It does an excellent job in portraying the sacrifices (and even mistakes) that parents make for their children’s well being.

The mother-son relationship, while not unique as a motif in this film (see my review of Pure or Beasts of the Southern Wild), is accurately and poignantly portrayed, which is guaranteed to win the film some fans (either mothers or sons or both).