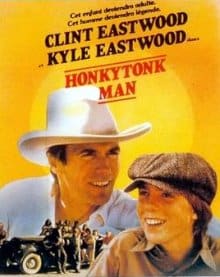 After a conversation with the site’s editor, you may recall that I set out to discover the gems of the American Coming-of-Age cinema. Since starting on this journey, it’s been both a rewarding experience for me and for the readers of this site,  some of whom have complained that most films reviewed here are foreign and hard to obtain. One recommendation from my editor was to see a 1982 film starring Clint Eastwood (who is also its director) – Honkytonk Man.

Honkytonk Man turned out to be an intriguing symbiosis of several genres: Western, Coming-of-Age, Comedy, Drama and,  last but not least, a Road movie. Some of these genres could be directly ascribed to the story (the Coming-of-Age one, for example), while others have influenced it in a particular way (the Western influences are like a homage of the classics of the genre which was at its peak when this film was produced).

The action in Honkytonk Man is set in the years of the Great Depression in the American Southwest. Fourteen-year-old Whit (Kyle Eastwood) is helping his parents prepare for an upcoming storm at their family-owned farm. Suddenly, in the midst of the storm, a wildly maneuvering car appears and crashes into a wooden windmill. The driver is soon revealed to be Whit’s uncle, “Red” Stovall (Clint Eastwood), famed songwriter and country singer – who is on his way to an audition at Nashville’s Grand Ole Opry. He is dead drunk, and it soon becomes clear he’s also suffering from tuberculosis. The young Whit bonds with his free-spirited uncle who treats him as a friend instead of as the little kid he is – an approach that wins the boy’s heart. And then there’s his uncle’s guitar in which Whit shows great interest.

The boy expresses his wish to accompany his uncle to Nashville – something he sees as an adventure and a way of replacing the daily farm routine with the chance to “…be somebody”. Naturally, Whit’s parents aren’t thrilled with the idea – but they let him go because they are afraid that his uncle’s condition may become worse.  The rest of the story follows their exploits on the road, where they experience thrilling adventures and meet some interesting characters. Among the latter are singers (Blues and Country stars), scammers (they get shot at), policemen, and ladies of questionable repute (which leads to Whit’s first sexual encounter). These experiences are new and exciting to the young boy – and offer him an opportunity to peek into the world of adulthood– a world to which he will soon be entering.  His uncle is both a mentor and a friend to the kid, showing him the manly things to do (most of which happen to be things that his parents wouldn’t approve).

I really like the film and there is more than one reason for that. While the story is not complex or suspenseful,  it does feature plenty of funny and heartwarming scenes. As I said in my recent review of The Cowboys — about not being that familiar with the American Western star John Wayne prior to seeing that movie — I also haven’t seen many movies with Clint Eastwood – so I had the opportunity to form an unbiased opinion of his acting. Not only was I impressed by it – his singing skills are on par with his acting.

Intriguingly, the film does not feature any non-diegetic music (none that came from an external source of the story itself) as all the songs were either performed by Clint Eastwood’s character or played on a radio the characters were listening to. This enhanced the film’s mood – and especially its ending — which is by far one of the most creative and memorable endings of a film you will ever see.

But if Clint Eastwood was good, the performance of his son, Kyle Eastwood as Whit, impressed me even more. While this could also be attributed to skilful editing, every time he appeared on camera, he had some facial expression emitting shyness, curiosity or just plain confusion — in a truly natural way. As the story developed so did his expressions, which clearly illustrated the Rite-of-Passage he was going through. His good looks and adorable appearance are another extra.

Unlike most films I have seen, the actors portraying the characters that the protagonists encounter on their journey are equally memorable.   From the Black Blues singer to the policemen, to the mechanic who gets hired to fix Red Stovall’s car – while I can’t recall the name of the actors, their characters are alive in my mind while writing this review.

When it comes to the film’s visual aspects – medium close-ups and close-ups of the characters are sparingly used, which increases the emotional value of the film by making the already touching story even more poignant. A lot of attention has been paid to the film’s lighting, with shadow lighting techniques being used to significant effect.

For a film length that exceeds two hours, I was never once bored and kept rooting for a successful outcome of the journey of Red Stovall and his nephew. Honkytonk Man turned out to be one of the best Coming-of-Age films I have seen. I did not even mind the fact that the narrative was not told in the first person – as it was genuinely engaging.

It is highly recommended!