How High Should Boys Sing?: A Book Review

When I first saw the cover of Martin Ashley‘s book How High Should Boys Sing?, while intrigued by the title, I thought that my lack of musical education might prevent me from thoughtfully enjoying his writing. Yet, as soon I started reading, I realized that while the book contained a great deal of references to musical terms and statistical and empirical research, the writing style of the author and the manner in which he presented his thesis and findings was not only intriguing, but an entertaining read as well.  As he stipulated in the introductory chapter:

“This is not a book about church music. It is about boys singing”

Ashley did not stick to the remote academic tone that would almost have guaranteed the boredom of most readers (except perhaps academic researchers). Instead, he used personal experiences, feelings and preferences to enhance his writing. Such authorship made his findings seem more sincere as it allows readers to interpret them through their own unique viewpoints. The arguments hold true:

“There must be something unusually special about boys and singing that touches something deep in a collective psyche.”

The book opens with a discussion of the nature of the word BOY – as a socially constructed concept rather than just a term for gender identification. In simpler terms, the subtitle Boys: What Are They and Why Do They Matter? is used in a chapter discussing the definition of treble music per se and the unique distinctions between singing boys and men, as well as establishing that: “the development of identity is the most fundamental task of boyhood.”

The second chapter titled, Singing as Social Control of Boyhood, traces the traditions and history of boys singing throughout the ages.

Thirdly, the author addresses the Physiology of the Young Male Voice. Here is where readers learn to distinguish between child and boy voices and the specifics of the speaking pitch and range of the boy’s voice. This is a chapter where an abundance of statistical data and musical terminology is utilized by the author.

In the fourth chapter one may note some familiar names of popular young male singers from the not too distant past: Joseph McManners and Declan Galbraith. Their voices and those of popular performers of classical (choral or sacred) music are analyzed utilizing data obtained via interviews of school pupils of similar age to the boy artists.

“Why would anybody want to hear a small boy squeaking Tears in Heaven in a treble voice when they could listen to the performance of Eric Clapton?”

As a person who’s had an extensive collection of treble music ever since my teen years, I first discovered the American siblings band Hanson. I have often been asked variations of this same question.

Ashley argues that: “There are adult audiences who do very much want to hear such performances. Such audiences give these performances value and without them they would not exist.”

As a part of those adult audiences, the fifth chapter of the book titled, Admiration of the Boy, helped me provide a better argument for future answers to this question. The author explores the roles of nostalgia and fantasy, in the formation of one’s musical tastes, and mentions a “tendency for adults to prefer the music they have enjoyed in their early to mid-teens (significantly more likely to be found in men than women)”.  This he derived from the empirical research of Schindler and Holbrook (2003). That would likely be one of the motives behind my own preferences for treble music. 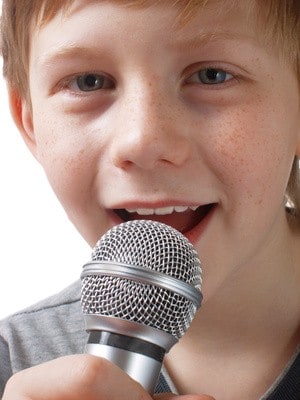 Note that until now predominately adult audiences are addressed as the author argues that “there is almost no peer group audience for the boy who sings in the high ‘head’ voice.” As much as I would like to disagree with such a statement, my own observations when attending boy choir concerts rather support Ashley’s contention.

Even with regard to popular bands consisting of young performers, many of which are featured on this site, I have noted that a great number of their fan base is comprised of adults.  The characteristics of both male and female adult audiences are examined in detail in the fifth chapter of How High Should Boys Sing?

However, there are some fans of young performers who are in the same age group. The answer to why their numbers are not as significant is to be found in another of the author’s findings: “Boys seem to inhabit an uncertain world in which admiration of talent and success coexists uncomfortably with jealousy.”  I am able to confirm that from all these years as a fan of a band comprised of boys.

Chapter Six, titled A Child Doing a Man’s Work in a Man’s World, explores the unique traits of the boys who decide to be choristers. A significant part of the chapter presents the chorister’s view of singing through the presentation of answers to interview questions to which the boys responded. In this chapter one can discover the answer of the essential question that gave the book its title:  How high should boys sing?

In the following chapter (Seven), titled Angels in the Market Place, the author addresses the spirituality in boys singing – emphasizing that “spiritual” does not necessarily mean religious. The notion of  the “angelic” voice of the boys is examined along with its association with the spiritual and commercial. The cute, angelic, childish image as a marketing strategy and the targeting of specific age groups is addressed. Various young singers are interviewed – among them a 14-year-old indie-punk singer and a member of the popular (and very commercial) British boy band The Choirboys. The reader can discover the perception that those singers have on their audiences, as well as learn about the strategies production companies utilize to increase the numbers of record sales of such young singers.

The last section of the book I have comments about is Chapter 9, which discusses the role of the media. This chapter examines the notion of celebrity status, and the effect of talent contests and reality shows on the careers and the personalities of young performers.

Having read How High Should Boys Sing?, I feel that I have learned a lot about the cultural phenomenon I have been a part of as both a member of the media and as a connoisseur of  treble voices. The book provides valuable insights into the physiology of the young performer, which their educators and parents will find, not only intriguing, but helpful.

How High Should Boys Sing?: Gender, Authenticity and Credibility in the Young Male Voice is available on Amazon.com and from various other retailers. At $89, I think the price is somewhat prohibitive, even though the extensive research of Martin Ashley is well worth it.