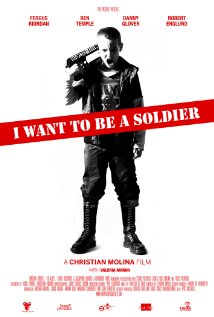 The opening scene of the 2010 film I Want To Be A Soldier leads the viewer to believe that the film will be about a rebellious youngster who won’t tolerate authority and won’t give in to threats. That’s Alex, and he is only eight years old. But then we see other scenes from earlier in his life that portray a young boy’s ideal upbringing – recorded via the family camcorder.   But is it the same boy? And if it is, what may have caused the transformation that resulted in his complete change of behavior? Is this change a normal part of growing up, or is it something else?

Like all kids, Alex dreams of his future. He wishes to become an astronaut (don’t all boys at one point or another?) – and as he gets his good night kiss from his mother, his only worry is how he will be able to do that if they both wear helmets during a space trip to the moon. One needs a lot of support to prepare to be an astronaut. But Alex is not alone. You see, he has a friend. True, it’s an imaginary friend, yet very real to Alex – a real astronaut who offers tutelary guidance to the boy as his mentor and,  yes, as a role model too.

Things start to change when Alex’s mother gives birth to two babies. At first, Alex is happy with his new big brother role, but as his parents’ attention shifts almost exclusively in favor of the younger members of the family, Alex starts to feel abandoned. He demands a TV set in his room, and his parents, who have always been reluctant to provide him with his own TV,  finally give in and grant his wish. What happens next will not surprise anyone.

The young Spanish director, Christian Molina, successfully transformed a somewhat less than original plot into a realistic tale about the influence that modern media may have on adolescents when adults abdicate from their responsibility. Violent scenes capture Alex’s imagination, distant wars, murders, and executions – all in abundance and easily accessible via the electronic box in his room. As a result, Alex changes both his attitude and his passions. He no longer wants to become an astronaut but, instead, a brave soldier who will destroy his nation’s enemies and make everyone pay. His imaginary astronaut friend is now replaced by a new figure – John Cluster – a cruel Sergeant equipped with advice and tips on becoming a better soldier. After all, that’s one of the roles imaginary friends have, right? They help kids make sense of the adult world around them.

Though the plot of I Want To Be A Soldier doesn’t exactly shine with originality, it does feature several carefully placed story turning points that manage to keep the viewer engaged. The young Fergus Riordan (for whom the role of Alex is his first lead role in a feature film) delivers an outstanding performance. Because of it, the tension that builds within Alex on the screen is truthfully reflected to the viewer. One even feels a bit of understanding and admittance to the rousing thrills of juvenile delinquency. In contrast, however, the performances of most of the adult actors felt stilted and unnatural. Despite these shortcomings, the film manages to evoke strong emotions in the viewer while inspiring thoughts of the circumstances and events that shape the mentality of a child. The violent scenes shown in the film merely reflect what children are exposed to nowadays. Yet they create a feeling of uneasiness and distress even in the adult viewer.

While I know the issue of how children are affected by violence in the media today is not a new one….I found this film very disturbing and it got me thinking about the violence children are exposed to via various media and games they play these days. Whether or not violence in the various media and in video games that children play negatively affects them, Director Molina has stated in an interview that he “wanted to educate the viewer to draw his own conclusions”.

Viewing this film made me do exactly that — form my own opinion. I encourage everyone to view I Want To Be A Soldier and form your own opinion of this very topical subject. 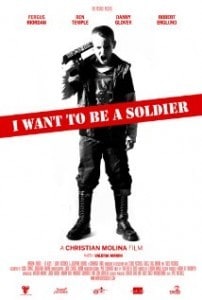