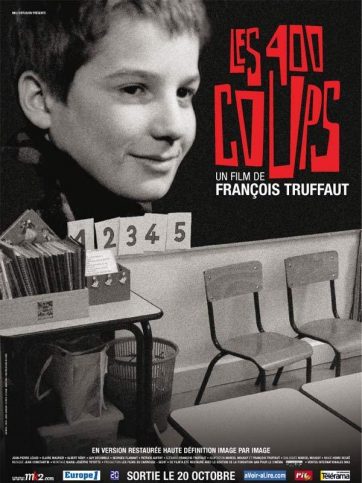 Les quatre cents coups(The 400 Blows) is an excellent coming of age film despite the early year in which it was made – 1959. The movie deals with the troubles which an average adolescence boy can get into – when understanding towards him lacks in the family. Antoine is a young lad who has never done wrong to anyone , goes to school and despite engaging in normal teenager mischiefs is just like your next door kid. His parents rarely pay attention to him -it almost seems that his existence is noticed only when he needs some money or when his mother demands something from him. His father is chasing his carrier and his mother rarely stays home – working much , or pretending to while having an affair with a coworker of hers. Interesting trivia about the film is that it is largely based on Truffaut’s ( its director ) own childhood experiences and probably this contributed to its wide success and status of true classic .

Antoine with his best friend

During the first thirty minutes of the movie – the action seemed really slow paced . This however allowed me to get familiar with the environment in which the boy lives- his parents , his friends , his school and interests. Later on those observations helped me to understand the factors that shape the present and the future of Antoine.

As a personal note I was really disgusted when Antoine`s parents sent him in a reformatory school – not really thinking of what is good for him , but only for themselves. I used to know a boy who once faced a similar destiny – only because the boyfriend of his mother did not like him hanging around. Once that boy made a stupid little childish mistake – his moter`s boyfriend made it look like it was a great deal and as a result the boy had to spend two years in a reformatory school. Probably that reference to my own experience made the movie even more touching …

Antoine and his ” loving ” parents

The camerawork in the movie is exceptional – especially when it comes to emphasizing the contrasts – innocence and its lost ( found in the puppet show watched by Antoine and his friend). Like most people who have seen and reviewed this movie I too was impressed by its final scene – a zoom in to a freeze frame, showing Antoine looking directly into the camera. There is so much desperation on his face – running away is no escape from his hopeless fate…

The 400 Blows, along with Les Mistons (1957), The Wild Child (1969) and Small Change (1969), represent one of the most tender and loving depictions of childhood in cinema. (original article)