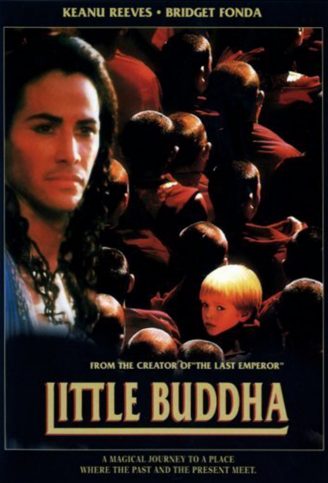 Little Buddha – what a wonderful film. I wish I had seen it earlier – but got the DVD only a week ago. It has been a while since I have seen a movie that is enjoyable to watch and educational at the same time. Brilliantly directed by Bernardo Bertolucci the movie allows the viewers to experience the wiseness of the Buddhist believes . I have never seen more understandable , well – told story of the live of Buddha . People like me with little knowledge of the Buddhist religion will enjoy the movie and be able to learn a lot from it.

The cinematography in Little Buddha is beautiful, the costumes are superb, and the acting is first class. Same statement is valid for the soundtrack-an unique commingle of electronic and organic instruments composed by the academy Award-winning composer Ryuichi Sakamoto.

The storyline is complex as it combines two different plots : the story of Jesse, a young American boy who may be the reincarnation of a dead priest and of Prince Siddhartha who is on his way to becoming the Buddha. Both stories are interrelated as we learn about the life of Siddhartha from a book that was given to Jesse by the Buddhist monks who came seeing for their reborn lama. The life of Buddha is presented trough the imagination of Jesse while reading the book and this only makes the story more appealing – especially for the younger ones out there.

My favorite quote of the movie :

Siddhartha heard an old musician…from a passing boat speaking to his pupil.

If you tighten the string too much, it will snap. And if you leave it too slack, it won’t play.

that these simple words held a great truth…and that in all these years he had been following…the wrong path.

To learn is to change.

The path to Enlightenment is in the Middle Way.It is the line between all opposite extremes.”