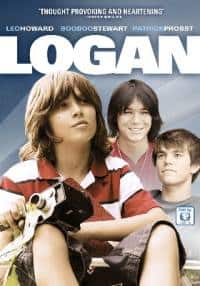 Occasionally you run across a film that you like in spite of all its flaws. Logan is such a film.

Logan is a story that focuses on the relationship between two brothers — Logan and Tyler Hoffman. Like many teenagers, Logan feels lost, invisible and is seeking some means by which to express himself. He writes a screenplay and wants to produce it but finds nothing but rejection, negativity and lack of understanding even from his most trusting confidant, his older brother. As such, the film deals with some really serious issues (those issues redacted so as to avoid a spoiler).

Logan handles these themes in a timely and honest manner. They are subjects many can empathize with, if not sympathize with. It’s no wonder that the distributor, Real Bean Entertainment, is offering free school and church screenings throughout the US, because it speaks to issues directly affecting the youth of America in the most powerful artistic language there is: film.

However the film, as intimated above, is not perfect.  But when it latches on to its central conflict, the film and its performers are powerful enough to buoy it. First and foremost on that list is the outstanding  performance of Leo Howard. Howard, who had previously been the host of Disney’s Leo Little’s Big Show segment, Shorts and recently starred on a Disney XD sitcom Kickin’ It, hasn’t ever really had a dramatic role which he could sink his teeth into, not of this size anyway.  In Logan, he truly allows there to be a connection between audience and material with an incredibly genuine and heartfelt rendition of his role.

Patrick Probst also rises to the occasion when the emotions intensify and the story takes its unexpected turns. He and Leo Howard have fantastic chemistry in these moments.

Also noteworthy is Booboo Stewart, best known from his participation in the Twilight Saga. While his character is a supporting one, he does function within the plot and with Stewart being credited as a producer on the project, it shows that he really believed in the film and wanted to see it come to fruition. It’s always good to see actors who take an interest in other production roles.

Ultimately, what one searches for in a film is a visceral reaction and Logan definitely caused that with this viewer. Looking back, what stuck with me was the emotions I felt and the message being conveyed, which young people should see. That is what shines brightest. Logan is an emotionally charged, heart-warming story that tackles a tough topic fearlessly.

Find out more about the film and the way to purchase it at its official web site : www.loganthemovie.com

Guest article by Bernardo Villela . He is  a writer, director, editor and film enthusiast who seeks to expand your movie-watching options. You can find him at:  http://themovierat.wordpress.com