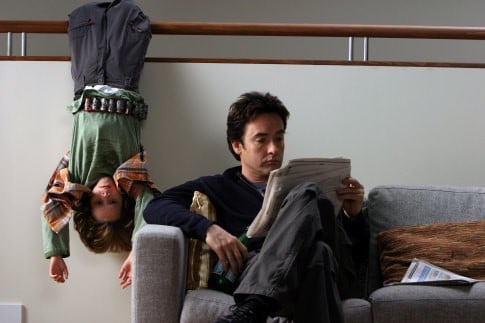 Article author : Georgi
A friend of mine recommended this movie to me though My Space. I am glad that he did so because it did turned out to be a good movie. Its tagline “The story of a man becoming a father…and a boy becoming a son” draw my instant attention. After seeing it I could only add that Marcian Child is a real coming of age movies – that somehow reminds us that there is no universal age – some of us are coming of age every single days of our lives and that`s so beautiful. We are creating new miracles , exploring new words – learning to be human. And may be all shall have the stamp on the box in which the Martian child was hiding from the sun – a big stamp “Fragile ! Handle with care” – loving the person who gets us out of that box and still does what`s this stamp says .
The plot of the movie is based on the real story of a single parent who decides to adopt a child. That child happen to be a six-year old orphan boy named Dennis who thinks that he came from Mars to fulfill a mission on the earth. From the moment they first meet a new mission lies ahead of both of them – that mission is pretty well described by the movies tagline I mentioned above.

The good plot is there. There is book with the same name and a short story .The movie is based on the short story – although there are people who argue that its actually based on the book – only the sexuality of the single parent was changed – to make sweeten the film for the general audience. I have not read the book yet – so can not really comment on that yet. The acting is average – but rather good than not – and the movie has a really good soundtrack too. Martian child seems to be a nice family movie – which you could enjoy some cloudy Sunday afternoon ( just like I did). Similar but a bit better movie would be About a Boy – just so you have an idea .
Previous articleThe Nature Of Nicholas
Next articleCanvas (2006)