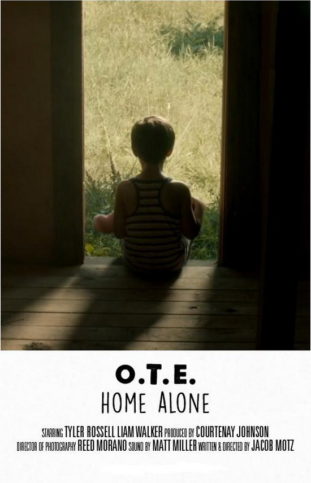 A few days ago, I stumbled upon Of The Earth (O.T.E), an intriguing short film written and directed by Jacob Motz.  In it, Mikey (Tyler Rossell), a boy of just seven years of age, finds himself in a post-apocalyptic world in which all adults have been killed in a pandemic. Yet, wrapped in the protective shield of innocence, Mikey manages to preserve a sense of normality (unlike the viewer who has already been through the Coming-of-Age tribulations).

One day Will (Liam Walker), a self-assured teen, drops by Mikey’s remote family home. He tries to convince the younger boy that he needs to leave the safety of his home (the only place Mikey knows) and come along with him. But can he be trusted….???

Although I was genuinely impressed when I first saw the film, I missed its message and its final significance with the camerawork, cinematography, and the young cast’s performance. That’s why I asked the people who follow theskykid.com on Facebook about their opinions.  One person suggested that the boys could have been ghosts who do not know they are dead.

Another compared the plot to that of the New Zealand TV series The Tribe (April 1999-Sept 2003). Stating that the storyline in that film also starts with a pandemic that kills the adults, some of the children are trained in survival by the adults in military camps who see that the end is near. Yet other darker interpretations were offered. I, for one, enjoy dark tales, and as I read some of those scenarios, I began to form a theory that the film could be a prequel to William Golding’s Lord of the Flies — that kind of universe.

The story in Of The Earth (O.T.E.), although unclear, invites the audience to think — to offer their own interpretations. And that’s where its beauty lies.  Then, while still pondering the story’s meaning, as I was preparing this write-up, I came across the Crowdsourcing page on Kickstarter.  On there, I read where director Motz writes about his film:

“There is a reason post-apocalyptic worlds are booming in the landscape of cinema. Whether a sublimation of fear of our dulled and detached modern civilization or a wish to reboot humanity, I believe that deep down, we yearn for a simpler life. Of The Earth isn’t just the how or why of the destructive reset button, but the framework of seeing children still in a state of development react to this sudden change.”

Without a doubt, the thought-provoking Coming-of-Age short film Of The Earth (O.T.E) is well worth your time.

O.T.E (2013)
16 min|Short|10 Sep 2013
5.1Rating: 5.1 / 10 from 11 users
7-year old Mikey awakens to a world where it seems his mother and all adults have died; but in his naive way he still maintains some degree of normalcy, until 12-year old Will shows up and tells Mikey he must go with him.
Director: Jacob Motz
Creator: Jacob Motz
Actors: Tyler Rossell, Liam Walker, Justine Raczkiewicz

If you have seen it and want to add your take, please feel free to do so here or on the Facebook post where we began discussing it.