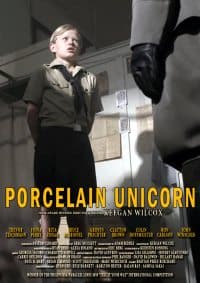 Some people disregard short films, thinking that a captivating story could not possibly be developed in just a few minutes time. Once upon a time I thought this too, but when I started writing about films I discovered that this was wrong.  I was reminded of this lesson learned with the poignant 2010 film directed by Keegan Wilcox: Porcelain Unicorn.

Set in present day Germany, the film opens with a flashback.  An elderly man recalls an event from his childhood, when he was like many of his friends — a member of the Hitler Youth Organization. As a 12-year-old boy (played by Trevor Teichmann), he had broken into an abandoned Jewish house and discovered a frightened young girl (Fiona Perry) trying to hide from the Nazi soldiers. Suddenly, a search party enters the house and decisions have to be made…

Prior to seeing Porcelain Unicorn I would not have believed that a film could evoke such emotions in me, making me care about the fate of its characters, especially in less than three minutes. This movie provides storytelling at its best, combined with resourceful acting, excellent production design, and a touching musical score. Director Wilcox has filled his short film with meaning, beauty, compassion and hope in the goodness of humanity.  I am astonished from the result of what he’s done with this short film and can only imagine what he could achieve at the helm of a full feature movie.

I urge you to invest three minutes of your time. It’s worth it!