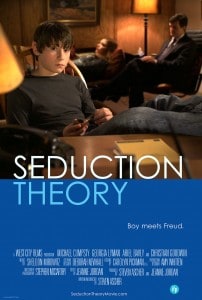 Labeling a film’s plot and manner of storytelling as “quirky” is, coincidentally, the right thing to do when you have a Coming-of-Age story soaked in Freudian nuances and with characters having many psychological traits on screen.

The viewer may be confused by on-screen events occurring in the past, present, and future, seemingly at the same time. Yet, perhaps unconsciously, the story makes sense, and when the final credits roll, most viewers will have gathered enough information to see the complete picture.

This has been an unconventional review opening to an unconventional movie: Steven Ascher‘s 2014 short film with the peculiar title Seduction Theory. It’s a short film that feels like a full feature thanks to comprehensive and involving plot development despite its relatively brief duration time.

The film features a Coming-of-Age story of a young boy or, actually, it’s a man recalling his childhood days and tribulations with little fondness yet in a manner that seems to look for answers way back then. Using first-person narrative, the film feels like an autobiographical novel. It surprisingly fits a lifetime of experiences into a limited format thanks to clever editing and an ingenious storytelling approach.

Christian Goodwin plays the lead role of a 12-year-old boy, and his facial expression and overall realistic portrayal of a boy trying to figure things out in the world is the real highlight of the movie. Of course, that performance is right up there with the film’s original storytelling. It’s hard to choose which one is more important, as together they result in an excellent cinematic experience. Identifying with the Christian’s character is easy, and most viewers will recall a happening in their own life relatable to a moment or moments shown on screen. In my case, as I have always found relationships wholly consuming and overly complicated, the story hit all the right tones.

Seduction Theory is a great short film and, while it clearly aims towards more mature audiences, it is a great way to experience an original and well-told Coming-of-Age story.