The Boys of St. Vincent

Some films are difficult to review. The Boys of St. Vincent is definitely one of them.  I decided that I will give it a shot – and you can decide for yourself if  I managed to give your some general idea of what the movie is about and if it is worth seeing .  Let me first outline the basics – The Boys of St. Vincent is a two-part made-for-TV that was produced and filmed in Canada.  It is not surprising that such a film was produced there instead of the US as the themes it touches are very sensible and Hollywood`s production in general fail to address serious issues and prefer to focus on things that sell better .  Let`s remember that another well written and directed movie which dealt with similar themes Jet Boy was also produced in Canada. The director of The Boys of St. Vincent did fell into the cliche trap – and the result the production is a bit predictable and incomplete.  The film on itself obtained quite a publicity when it was released – in fact it was banned after his its first screening on Canadian TV ( much thanks to protest from the Catholic church)  – only to be released on a DVD shorty after.  One should mention that the movie  topped the ratings when it was breakfasted having with 2.1 million viewers on the first night and 2.6 million on the second. (source ) 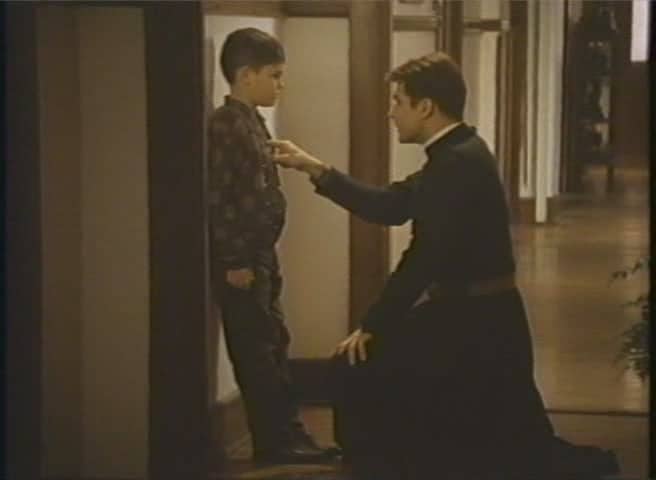 The movie itself deals with abuse both physical , psychological and sexual. It could be described as psychological drama  – as a lot of thought is given to the creation of the character`s thinking and motives . The action takes place at the at the St. Vincent Orphanage in Newfoundland. The priest who are supposed to take care of the boys took advantage of them to satisfy their sick desires . This includes varies forms of abuse and beating. Some of the scenes depicting the abuses are quite disturbing which makes the movie hard to watch . Similar scenes one can observe in films such as Sleepers and Song for Raggy boy – and I must warn you that this movie is not really suitable for those of you who are used to the cotton candy American productions that frequent the cinemas .

When the janitor discovers that one of the boys has been severely beaten , he takes him to the hospital and tries to report the incident to the chief administrator of the orphanage. A police investigation is launched – but it bumps in many obstacles such as corrupts politicians , church officials and cops .

The casting in the movie was nearly perfect and as result the acting was outstanding all over. Worth mentioning in the performance of the young Johnny Morina in the role of Kevin – a 10 years old  boy who is being favored by the chief priest in charge and attempts to avoid the abuse by escaping the orphanage – only to be ” returned home ” from the members of the police.  Of course I just have to pay my respect to the actor Henry Czerny – who played the central ” evil ” role – for acting so well I trully hated him ( the priest – not the actual actor )

At the end of the review I will recommend this movie.  Despite being a very disturbing film it it well worth watching. Of course that is not only my opinion. “The Boys of St. Vincent received very positive reviews from local, national and international critics, including The New Yorker, The New York Times, Commonweal, Entertainment Weekly and The New Republic. It was also the recipient of numerous awards both in Canada and internationally. “(source )

“The Boys of St. Vincent” is enlightened film making, and the issues raised, however repugnant, are important and too long have been ignored by film.“

I just watched the second part of the movie titled ” The Boys of St. Vincent: 15 Years Later ” – as you could imagine that part dealt with the consequences of abuse and the trail to which the responsible for that abuse were finally brought to.  The second part does not have that many shocking scenes like the first one – but one would definitely have to hold his breath at times .  I expected a bit more from the second part – and was hoping that the stereotypes present in the first one – won`t appear once again – but they did appear reinforced .  In fact the movie does not leave you much options to think for yourself – of what happened , could it have been avoided …etc – in addition I found the ending quite disappointing.  Still if you have seen the first part – the second one will help you to fill out some details .