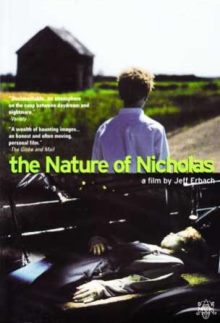 A while ago, I was told that this was a very “weird” film. When my friend said it was “weird”,  I was expecting more along the lines of visual abstraction. This was not the case. This film takes “weird” to a whole new realm.

The acting is a bit average throughout, mainly from the support roles. I thought Jeff Sutton as Nicholas was outstanding as the lead. It’s a shame he didn’t go on to do much after that.

I thought the film started strongly in terms of story and was very clear and easy to relate to. The characters had clear wants and clear obstacles, which was good. After the kiss, though, I have to admit that I was a little thrown by the zombie. It just pops up out of nothing and turns into a whole new film. As the film progressed, though, I started to put the pieces of the puzzle together.

Here’s how I see it:

Zombie Bobby represents Bobby’s feelings towards Nicholas (I think Bobby felt the same way for Nicholas). He knows those feelings are there, but he wants to kill them.  Hence, the human Bobby is constantly nagging at Nicholas to let it die.

Everything that we see after the kiss is in Nicholas’ mind. It is his constant struggle to deal with the feelings of being gay and the social implications of these feelings, as well as it being taboo within society.  Although it’s not entirely clear, the film could possibly be set the 50’s, considering the father’s uniform and the noises of the plane sound as if they are from WWII, as well as the fashion of the kids.  If so, those feelings would be even more taboo if that is the era in which the film takes place.

When Nicholas begins to turn into a zombie, that represents Nicholas giving in to these ideas of it being a taboo. It’s possibly that, in reality, his mother found him out and pumped into his mind that it was wrong. Either way, by this stage, Nicholas has decided to let that side of him die. 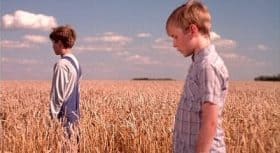 If this interpretation is accurate, I believe it is, then the ending is very morbid and very true, especially considering he is entering junior high. High School would be one of the most tortuous places to anyone who is different. So it is understandable that he would not want to be seen as someone who is gay. I think the real beginning of this turnaround is at the picnic scene, where he speaks to Roy about the girl who likes him. It’s almost like he is accepting that because he has to.

Now the father representation is the one that I am a little confused about. The fact that he is playing people as puppets could represent that his father was an outright authoritative figure in the family and thoroughly conservative. It could represent that if his father knew who he was, he would be disgraced. This is why he is part of the imagination, the omnipresent father that always looms over the son, even after death. Considering we know absolutely nothing about the father, or the father’s relationship to Nicholas, this is possible. He may have still liked his father, but he knows that his father would never approve of his feelings, which is why his father covers the zombie Nicholas in that abstract house at the end of the film. The house represents the suppression of feelings for Nicholas.

It is an interesting little film that could have many interpretations. Although the ending is a sad and morbid, I think it still represents the theme that you should always be true to yourself, no matter what society (or anybody in it) says.

I can’t say I thought it was a fantastic film, because it is not. Critically, I have to say that it does seem somewhat jumbled and lost in it’s story. The bouncing between reality and surrealism could come off as very confusing and the message could be misconstrued. However, I think after the kiss we have moved into the realm of surrealism, and we do not leave that realm for the rest of the film (i.e. Nicholas’ psyche). 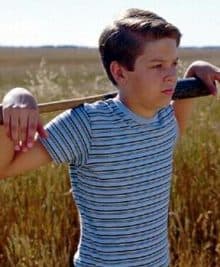 I could relate to this film more than most people, though, going through something very, very similar.  I had a friendship exactly like this when I was around the same age. This is where I found the heart in the film. Nicholas reminded me so much of myself, especially his awkwardness at the party.

I can say that going through these feelings at that age is somewhat of a surreal and abstract experience, which is why I think they chose to tell their story in this manner. Your mind goes insane thinking about who you are at that age, so it is understandable why they took this approach.

Overall, a film that hit very close to home for me, and one that I think was told in a very unorthodox manner.  But I think it worked for me. I didn’t fall in love with the film per se, but I understood the story and the characters. In saying that, though I think many people who see this film will not understand the underlying subtext or the direction of the characters, and I think that is understandable in this particular case.

The Nature of Nicholas at IMDB

The Nature of Nicholas Trailer