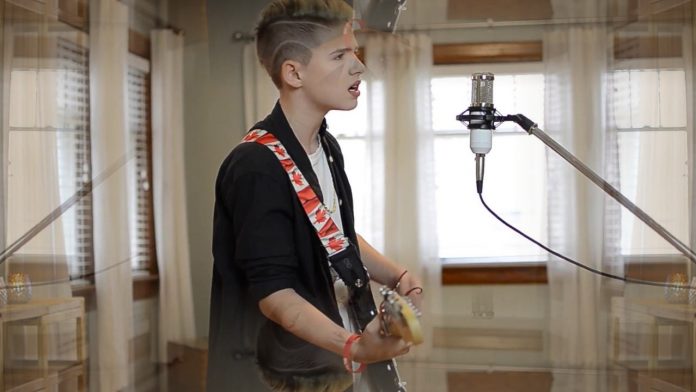 Let’s zoom in on this boy from Ontario

The first tune I heard, thanks to Georgi’s (this site’s administator) link, was I Feel It Coming-I Can’t Feel My Face (cover) which is produced, mixed and mastered by Adam Newcomb and opens with thrumming tones followed by Tyler’s voice — strong and clear.

The song moves along moderately, with no surprising trills, first verse, but solid notes. Visually we can focus on the singer, (videography by Cole Hardy), which worked well for me since I had never seen Tyler before.

The chorus, which is partly double-tracked, picks up the pace and volume, in a song about anticipated love. About this time Tyler plays to the camera more, as a pounding drum beat and some back up chorus, carry the song along. I understand that repetition is being used as a device here, but it becomes a bit much at the end.

…driving on to the end, with a muted instrumental track.

The simple “at home” type video worked well for me, focusing on the singer who looks quite composed with the e-Guitar.

My second discovery was One Dance (cover Drake) from eight months back, which I found charming. It’s noticeable that, even in this short time, Tyler’s voice has deepened slightly. This song has a dreamy, enchanting tone, a mellow repeat. Its about “leaving” and the visual once again shows Tyler playing his guitar (though I’m not sure if that’s the actual sound out of the studio).

Maybe I should ask his Vocal Coach/Project Manager/Executive Producer Roberta Michele Quilico or the Bird Loft School of Voice in Oshawa.

Tyler’s voice is pure and magically puerile here, quite high pitched, not yet concerned with adding embellishments to the tune. The RAP insert works with its play on various similar words. In all, this performance is simple, but dramatic, because it’s delivered with style.

A charming and natural young performer

No doubt the tender quality of Tyler’s voice makes his cover of Niall Horan/James Arthur (This Town/Say You Won’t Let Go) so special. The mix of voice with guitar is near perfect here. The voice is soft, but not melodramatic, producing a charming and natural cover. His notes are clear and confident-the sentiment is believable, and the lyric enunciation just faultless.

I am, in short, thrilled to introduce this new talent from Canada to TheSkyKid.com’s readership. It appears to me he has made a great start with these videos, and I’m certain more creative ones will follow.  My wish is for some originals from him soon.

Best Wishes to all associated with “Project Tyler”.

Previous articleTroye Sivan – The One and Only
Next articleKain Rivers: The Boy with Three Names