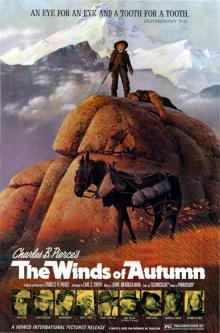 Westerns – once they ruled the cinemas across the world.  Nowadays it seems that the only place where one can watch them is on specialized cable channels. That is probably the reason why The Winds of Autumn is the only western Coming-of-Age film that I have seen so far. Beforehand, I must warn you that most of my impressions of the American West and its heroes I owe to the books of the German writer Karl May (and his characters Winnetou and Old Shatterhand) and I generally find the cinematic representations of the genre somewhat less satisfying.

The Winds of Autumn stars Chuck Pierce Jr. in the role of the eleven-year-old Joel Rigney — who lives with his God-fearing parents and older sister in a remote house in the wilderness of Montana. One day a family of outlaw runaways comes to the house looking for help for their hurt comrade. The story takes an unfortunate turn and young Joel’s family is cruelly murdered despite their hospitality. Because he was visiting a neighbor when the massacre occured, Joel  escapes the fate of his family, but now he is all alone.  The council of elders gathers to decide who is going to take care of the orphaned child, yet all Joel wants to know is: Who is going to go after the men who murdered his family? The elders try to calm the boy by quoting a passage from the bible, reminding him that as Quakers they see themselves as peaceful people opposed to meeting violence with violence.  To which Joel answers with another bible passage:

“And thy eye shall not pity; but life shall go for life, eye for eye, tooth for tooth, hand for hand, foot for foot.”

The scene in which Joel recites that passage in front of the elders probably contain the most moving moments of the whole film.

Vengeance – but can/should an eleven-year-old boy seek and obtain it? Will he find someone who would be willing to help despite the religious beliefs of the community? Will young Joel’s life end tragically, in a similar fashion to his family’s demise? To find answers to these questions you will have to see the movie.

For most of the time the camera is kept rather steady – objectively recording the action.  This and the less then frequent appearance of the lead character (the young Joel) somehow limits the viewer’s ability to associate with him and his journey. The subtle Coming-of-Age nuance in the film is made all the more symbolic by setting the action in the Autumn season.  Autumn embodies an evolution from youth to a more mature part of life  and its cold winds, blowing mercilessly, wrench the leaves from the trees — leaving them barren. 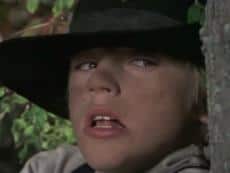 Yet the age of the lead character is the only thing that differentiates The Winds of Autumn from the typical western story of a protagonist who has had something wrong done to him in the past and is desperately trying to overcome his fears and bring vengeance to his enemies. Following established genre stereotypes is not necessarily a bad thing in and of itself.  But the movie left me wishing that the character of young Joel was better developed.

The Winds of Autumn is an adventurous drama that has appeal for young viewers. Despite the fact the film was released more than forty years ago, the story is as engaging as any modern day adventure.

The movie at IMDB