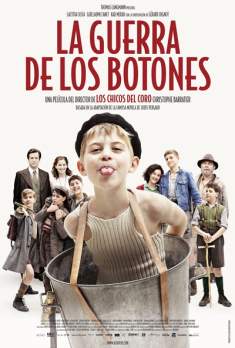 I have seen the 1962 version directed by Yves Robert and really liked it. In 1994, Warner Bros released an English language version (the 1962 is in French) directed by John Roberts.  And although the 1994 release is the version that gained the most popularity in the English speaking world, I feel it lacked the spirit and the atmosphere of Yves Robert`s adaptation.

This year alone, two new versions of the The War of the Buttons have been released in France – with only few days between the releases – one directed by Yann Samuell and another by Christophe Barratie, whose work on Les choristes made his name more popular among fans of the Coming- of-Age genre. It must not be easy for the people in France to choose between two adaptations of the same story showing simultaneously in the cinemas  across the country. Of course, seeing both movies is a possibility, but I wonder how many people would do that (I know I will, given the opportunity).  But in my case, I didn’t have to choose as my local cinemas only screen the Christophe Barratie version of the film.  And that’s the one I saw and on which I will focus this review.

The basic premise of the story remains the same as the book – the rivalry between two groups of boys and their leaders from two nearby villages: Longeverne and Velrans.  However, the narrative of this version has been changed slightly and the action now takes place in the years of the German occupation of France during the Second World War. There is also the introduction of two new side stories – that of Miriam (Ilona Bachelier), a young Jewish girl who is in hiding under the name of Violette – and the role of the French Resistance in the war. To me, these modifications result in a more intriguing and engaging narrative.

In 2011, the wide screen “battle” scenes are truly impressive. There’s a lot of dramatic atmosphere embedded into them so that the viewer of the film sees the battles in all their glory just as the kids from the villages did. Embodying such a sense of importance in a game may not appeal to all viewers, as some would rather dismiss the heroic battle between two gangs of boys as a meaningless activity. But, then again, it’s that kind of activity that shapes us as persons.

The young cast (mostly newcomers to the cinema) is chosen extremely well and it’s a pure delight to observe their acting.  Clement Godfrey, in the role of Little Gibus, drew a lot of laughs and “awws” from the audience in the theater.  Though he is not the lead protagonist of the film, his charismatic appearance steals the hearts of viewers (which is probably why he is featured on the film’s poster). Christophe Barratie did a wonderful job directing the youthful cast and that’s just what I expected from him, since Les choristes is one of my all time favorite films (of course, the music has a lot to do with that as well).

The photography in the film is remarkable as well, especially the battle scenes I already mentioned, but also the beautiful landscape shots. The combination of those scenes, along with the excellent camera work and a focus on the young actors, all add up to first class cinematography. The music score is also more notable and more dominate than those of the 1962 and 1994 adaptations of the film. 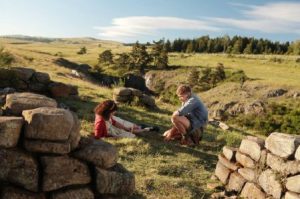 The day I saw the film, the auditorium of the theater was filled predominately with adults (who are likely to have seen at least one of the previous adaptations of the story). And, judging from the overheard comments in the hall, they all liked the film. Indeed,  the War of the Buttons nowadays brings a sense of nostalgia – nostalgia of a childhood distinct from today’s technologically obsessed one that most of today’s youngsters experience. That being said, I also saw a lot of children accompanied by their parents leaving the showing of the film previous to the one I saw. This indicates that many parents see the film as fit for their offspring, but somehow I’m not fully convinced that the young audience would enjoy the film as much as their parents.

Compared to the 1962 and 1994 versions of the War of the Buttons, I found the one directed by Christophe Barratie filled with much more dramatic moments and beautiful aesthetics. If  I were asked to pick a favorite from among the adaptations I’ve seen, I would pick this film and I don’t hesitate to recommend it to the readers of TheSkyKid.com.