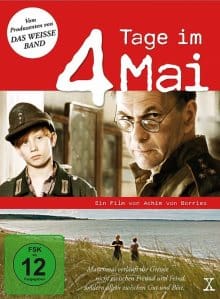 Can the events that happen in a four day period change a person? How about if the four days in question are those before the end of the World War II?

I had almost given up on the possibility of watching an original take on the events that took place in World War II. Yet the narrative of 4 Days in May (a co-production of Germany and Russia) turned out to be emotive and devoid of clichés and stereotypes. It’s a story of honor that deserves to be told.

Written and directed by Achim von Borries, the film focuses on the experiences of a young German boy named Peter who lives with his aunt in a manor along with thirty orphaned young girls. In the background… a radio narrator announces the end of the war and the unconditional surrender of the German army to the Allies.  When a Russian patrol discovers the orphanage Peter, as the  “only man of the house”, decides to protect the girls and women who take care of them. Suddenly a big group of fleeing German soldiers appear on the nearby coast. For Peter, the war is not over…

4 Days in May has such high production values that I’m surprised its international popularity is relatively low.  Instead of the bloodshed of war, the story is oriented towards the people who fought – but not just the soldiers. Having a 13-year-old boy as the central figure of the story ensures that rite-of-passage nuances are integrated into the plot. But 4 Days in May has much more to offer than simply a child-like perspective of war. As to the lack of popularity – I’m willing to attribute that mostly to the language barrier as discussed below. 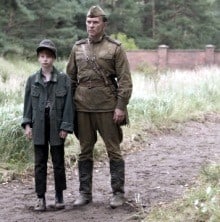 The camerawork is spectacular. The creative use of highly mobile cameras has produced a series of high shots, panoramic ones, and a precise attention to detail. The background music boosts the suspense and anxiety in some scenes and enhances the dramatic impact of others.

Most of the dialogue is in Russian and some is in German. For many viewers, closed captioning will likely be needed. While this may make some of the English speaking audience reluctant to see the film, in my opinion the absence of dubbing enhances the atmosphere and the mood of the film — boosting its authenticity. Peter, the young protagonist, speaks both German and Russian (on account of his aunt being from St. Peterburg) and there is peculiar way in which he pronounces the Russian words. In a sense, his childish nature seems to came out when he speaks in Russian, while his German tends to project more manliness and self-assurance for “his people” to witness.

The production design is immaculate – from the costumes (civilian clothes or uniforms) to the props and the weapons. It’s impossible not to feel the atmosphere of the time – the days, the four days before the end of the war. An old manor is used as a childrens home on an island that limits the movement of both the German and the Russian forces. As far as settings are concerned, the visual details of the film are on a par with what one would expect from a period piece.

For the most part, the film’s plot follows a chronological order. The exception is its beginning, which hints from whose viewpoint the story will be told. For the duration of the film, one is literally sucked into the story. The action is dramatic, yet intense.  While emotional scenes are present in the film, it is by no way overly sentimental.

The third person narrative ensures that while one is concerned about the fate of the rebellious German boy, there is an opportunity to experience the four days in May through the perspective of several major characters, including a Russian Captain and a German girl hidden at the attic. Yet the underlying motif of loss of innocence persists throughout the entire film.

More than once, the audience will experience anxiety — unsure of what will happen to the young German boy — a boy who wants to be a man, but is he ready to make a man’s decision and take on a man’s responsibilities.

While one may feel sympathy for Peter and his courageous actions, he does not always make the right choices. This further enhances the believably of his character as mistakes have consequences and hopefully one learns from them. Such is the case with Peter, whose experiences and perceptions change and adjust to the realities of his situation as the story unfolds.The unlikely friendship forged between Peter and the captain of the Red Army is essential to the story.  It’s much more than a fatherless boy looking for a father figure or a mourning man looking for a surrogate son.  It’s a friendship based  on respect and understanding .

Based on the films I have seen, I stand behind the thesis that a  narrative structure based on the Coming-of-Age experiences of a child is one of the most poignant and emotive ways to portray a war and its impact on people at the scene and of society as a whole.

Although these films may share a perception of reality as seen through a child’s eyes, the director and screenwriters have offered a wide variety of intriguing presentations of an otherwise familiar story: such as have been previously presented by the disturbing images of Elem Klimov’s Come and See, to the artful aesthetic of Jakub Kolski’s film Venice, to the dramatic overtones of Tarkosky’s Ivan’s Childhood and from the creative mixture of fantasy and reality in the 2012 movie I Declare War. The story of 4 Days of May focuses on the dignity of people —  on their sense of right and wrong. It’s a story of people who have learned to value each day they’re alive, yet willing to risk their lives to protect those of others.

4 Days in May – Official English Trailer