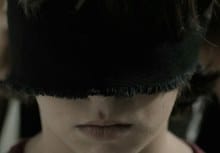 Many kids (definitely the boys) go through some kind of an initiation ritual to prove worthy of joining a social group — be it just the “in” crowd or a gang. Mixing peer pressure, courage, and a willingness to put yourself at risk if that will help you impress the others – are all things many of us have experienced. I still recall a lake with an island in the middle, an island that everyone had to swim to regardless of his aquatic skills — to prove worthy of being a … friend. Such an initiation ritual is the focus of Francesco Calabrese’s short film I Killer.

It features an intriguing, yet disturbing, narrative: two young boys trying to join a gang of tough kids – the Killers. The initiation rite includes secrecy, blindfolds, blood oaths and, the ultimate requirement, a sacrifice. Will the boys manage to protect their innocence, or have they lost it while trying to project a new, more self-assured, image?

I Killer is an extremely moody film, atmospheric and captivating despite its violent narrative. The action is set in Italy in the 1980’s. The sets and props bring to mind the classical Coming-of-Age films of the 80’s: IT, Stand by Me, The Goonies, Lost Boys. The cast is comprised entirely of children – more than 20 boys – all of them with little or no prior acting experience.  In a way, I Killer almost feels like a modern day remake of The Lord of Flies.  The names of the two lead protagonists remain unknown, but their characters are developed enough to make the viewer engage with their feelings and experiences- their hopes and fears.

What mostly impresses in the film is the ending and the preceding scene, which utilizes visual metaphor to illustrate the importance of childhood and boyhood in particular.

Watch the entire short-film below :