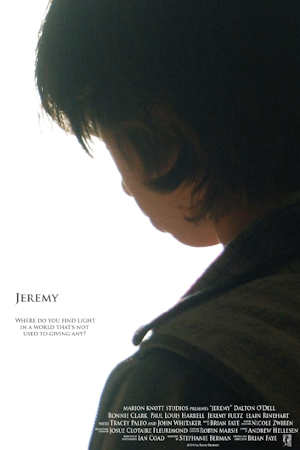 There are many Coming-of-Age movies that focus on the first religious experiences of a young person. Looking for a film of that genre, I’m happy I chose Brian Faye‘s short film, Jeremy.  The story focuses on a young boy whose personal circumstances are anything but favorable. He dwells in a trailer park alongside his lottery obsessed mother, her latest boyfriend and two older brothers – who like nothing better than to tease him.

While visiting his father in jail, Jeremy (played by Dalton O’Dell) is quite surprised to find out that his papa has been spending time with a church group. Curiosity awakened, the boy decides to attend a church on his own and see what it is all about, hoping to be different than the television preacher urging people to “Get their demons out”.

Essentially Jeremy is a movie about self-discovery and determination. Cinematographically the film impresses with its framing while the cast delivers credible performances all around. The musical score is quite melancholic, which fits the overall mood of the narrative. Unfortunately, the story seems a bit far fledged by the last scenes – mainly for the emphasis on Jeremy’s wish – a white shirt and a tie that he can wear at Sunday school. While I get the idea of conformity and acceptance (or fitting in) is symbolically addressed, I find it ridiculous that one’s appearance has to have so much importance to the people in the church. That and the fact that the first encounter with the pastor looked more like a kid sent to a dean’s office.

Then again, one has to take a story in the context of its setting – in Jeremy’s case that is rural USA. So it’s quite possible that audiences may dismiss the imperfections that I noted as irrelevant. Being a member of the Eastern Orthodox faith, my idea of church is somewhat different than the one portrayed in the movie.

Brian Faye‘s short film is filled with unrealized potential but, at the same time, it manages to get its message across in a manner that does not bore its audience, which so often tends to be the case with films having a religious theme (i.e. the 2012 film I Am Gabriel).

A movie about self-discovery and determination with impressive cinematography and credible performances by its cast.
3.4
OUR SCORE