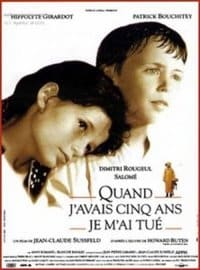 “It’s me and Blacky, galloping on…
Until there are no more houses…
no more people,
until there is nobody,
no more schools,
nothing more.”

Quand j’avais cinq ans je m’ai tué  (When I Was Five I Killed Myself) is a French film based on the novel by Howard Buten. It tells the story of Gilbert Rembrant – or just Gil –  an eight-year-old boy and is set in a juvenile mental hospital in 1950’s France. He is there because of what he did to Jessica.  Who is she and what happened to her? The viewer finds out through frequent flashbacks as Gil is being treated at the institution.

Gil encounters a mix of treatment at the institution.  Though one doctor is kind toward him, treating him with respect and compassion, generally the staff is more authoritarian, not overly concerned with the state of mind or the feelings of their young patients as long as the classical theories, methodologies and treatments are being applied.  This latter group includes the primary doctor who works with Gil and Gil does not want to confide in that doctor, who strikes him as a cold authoritative person.  So, overall, Gil doesn’t like the hospital “I hate this place. I want to kill it “.   Instead, when locked in the “quiet room”, he writes the story of his life on the walls.  He does remember everything, Jessica most of all, and his feelings for her. She’s his first, unforgettable love. Yes, love.  Because Gil, despite his young age, is hopelessly in love with Jessica. 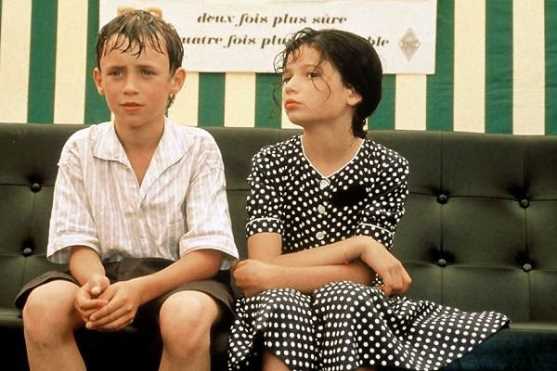 The story of the film is told in the first person by Gil as he as he narrates his thoughts while recalling his experiences.  This approach allows the viewer an intriguing insight into a little boy’s mind. We see Gil’s daily routine in the mental hospital and, while seeing the children in any kind of hospital it’s always hard, its even tougher to see them confined to a mental hospital.  Unlike the scenes in the The Boy Who Cried Bitch, the camera focuses not only on the film’s protagonist, but on the other young patients as well.  I can’t recall seeing other films that show the insides of this type of institution. Not that they don’t exist, but it’s just as if society prefers not to know about them. 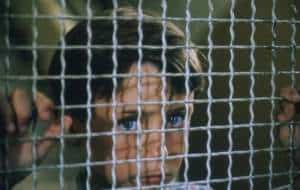 Gil’s placement in the institution reminded me of the 1975 American drama One Flew Over the Cuckoo’s Nest. Its hero,  McMurphy, just like Gil in Quand j’avais cinq ans, je m’ai tue, doesnt really have mental issues. Yet once locked up, he shows defiance for the methods used to extract information from him. Observing the other patients in the hospital, he gets confused, nervous and even scared. Yet his good nature helps him find an approach to an autistic boy while in the hospital.

Quand j’avais cinq ans, je m’ai tue can be described as a coming-of-age film, a drama and even a love story. It owes this categorization to its complicated plot, which features romance, psychology and loss of innocence all blended together and presented in an engaging manner by skillful Director Jean-Claude Sussfeld and an excellent cast. The young Dimitri Rougeul is quite convincing in his role of a dreamy and sensitive child and he truly carries the film, conveying the powerful emotions and youthful confusion of his intriguing and complex character.  The cinematography of the film is characterized by a combination of long shots and close ups (the latter often on the eyes as they say they are the mirror of the soul). The soundtrack of the film, mainly melancholic piano music, contributes greatly to its atmosphere.

To call Quand j’avais cinq ans, je m’ai tue a controversial film would be an overstatement as, even if the story makes references to the children’s sexuality, it does so in such a natural and innocent way.