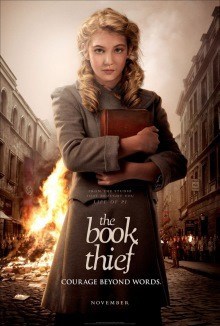 The Book Thief is an internationally bestselling book. Yet, when I decided to see the 2013 movie adaptation directed by Brian Percival, I hardly knew anything more about its story other than the action is set in Nazi Germany. More often than not, films about wars with children in the lead role turn out to be heart-wrenching dramas, which is why my expectation was set in that direction. Unfortunately, while there are a lot of things that I liked about the film (especially the intriguing voice-over narrative), it failed to involve me as deeply as some of the other films with similar themes: The Island on Bird Street (1997), The Boy in the Striped Pajamas (2008), or 4 Days in May (2011).

Not having read Markus Zusak‘s novel, I could only speculate about its qualities. But I find the common belief to be true — that usually books deliver much more captivating and emotional experiences than their movie adaptations. The Book Thief’s adaptation feels more like a fairy tale at times than a serious, realistic drama. Such an approach to storytelling has its advantages. A lot of attention has been paid to the visual design of the production. Sets and costumes convincingly recreate the period of history in which the action is set. Yet, somehow the settings and the vibrant cinematography of the film upstaged the actors.

And speaking of acting, The Book Thief is one of those films in which an actor in a supporting role outperforms the lead actor. Despite less screen time for Nico Liersch as the faithful friend of Liesel (Sophie Nelisse), a young girl from whose viewpoint is largely told, Nico manages to fill his character with authenticity and impulsiveness. In comparison to his performance – the acting of Sophie Nelisse feels a bit stilted – even timid, so much so that I found it impossible to identify with her character’s emotions. I’ve found that identifying with the lead character is one of the essential requisites if one is truly to appreciate the Coming-of-Age nuances in any story. I was also not impressed with any of the members of the adult cast,  including Oscar-winner Geoffrey Rush.

The objective point of view that director Brian Percival utilized ensured continuity of the narrative but effectively resulted in boredom after the first hour. Keeping in mind that the suspense amount in the story is minimal,  I find the screen duration to be unnecessarily stretched – over 130 minutes.

I honestly enjoyed some of the scenes, mostly those that portrayed the development of the relationship and trust between Nico Liersch and Sophie Nelisse’s characters. Those scenes with a humour hint provided a welcomed relief from the otherwise pretty straightforward and chronological storytelling.

For those who enjoy a fairy tale manner of narration, Brian Percival’s adaptation of The Book Thief would fit in perfectly on a lazy Sunday afternoon.  But if you’re like me and prefer more realistic and emotional portrayals of the undoubtedly dramatic events that took place in Germany during World War II, you will be better off looking elsewhere.