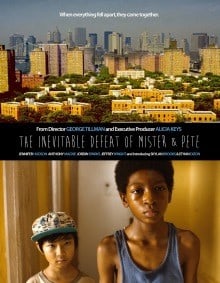 Most Coming-of-Age films have their narratives set in the past. That is why I am always intrigued when I hear about a film with a story line set in the present time. George Tillman Jr.`s 2013 drama The Inevitable Defeat of Mister & Pete really impressed me with its wonderful portrayal of contemporary urban childhood.

With a story about an African-American kid set in Brooklyn, one could expect to see some typical ghetto types: drug dealers, an Indian shop owner, gangsters, prostitutes and brutish policemen. Add R & B and Rap vibes to highlight the social inequalities and the struggle against them and you get a pretty good idea of the atmosphere that prevails in the movie. The familiarity of characters and situations makes the film a bit predictable. Fortunately, the excellent portrayals presented by the young cast is sufficient to keep the audience interested in their fate and consequently with the film’s narrative.

George Tillman Jr. wastes no time involving the audience with the problems of the film’s young protagonist: 14-year-old Mister (Skylan Brooks). Failing eighth grade, he returns home one day where he witnesses the arrest of his neighbor and, what’s worse, his mother injecting drugs into her veins. One can clearly read the disappointment on the youngster’s face. Not surprise, fear or anger, but shear disappointment as he wants better for his family. After seeing a posting at his school for auditions for children’s roles in a film being shot locally, Mister dreams of becoming an actor and eventually living in Beverly Hills.  It would be a chance to change his life for good.  But in the meantime, he has to manage his fate as best as he can.

A 10-year-old Korean kid, Pete (Ethan Dizon), has a tough life of his own. With his mother cruising the streets, he spends a lot of time at Mister’s flat. It’s not the best arrangement for the angry teenager, who has to babysit the young child. Pete has managed to preserve his innocence, but is confused when, after observing a shop-lifter at work, his older mentor instructs him that he should not snitch as, in their neighborhood, “People do what they have to in order to survive”.

Soon Mister and Pete are left to test this maxim on their own, when Mister’s mom is arrested and they find themselves alone in the big city. They need to survive while avoiding the cops (who want to capture them and send them off to an orphanage).  It is implied that the orphanage is a pretty scary and shady place — especially for newcomers.

While initially Mister is not fond of Pete, as the story unfolds they bond together. Mister assumes the mentoring role and often acts as a big brother, putting himself at risk to protect his fragile younger protégée. It’s intriguing to observe the development of their characters – troublesome Mister forced to grow up rapidly while trying to prepare his younger friend for the challenges of life, while still shielding his innocence.

The relationship between the two protagonists is an essential ingredient of the film. The viewer learns more about their backgrounds and personalities thanks to their encounters with a variety of colorful characters that inhabit their world. This results in a compelling narrative — despite the abundant presence of stereotypes.

Was I really moved by The Inevitable Defeat of Mister & Pete? Admittedly, while its story intrigued me, I didn’t feel a strong emotional attachment to its characters. Maybe it’s because some of the scenes have been softened in order to ensure a wider audience appeal (which was confirmed to me by watching a deleted scene in which one of the characters dies, in an article about the film that appeared in USA Today). The Coming-of-Age value of The Inevitable Defeat of Mister & Pete lies in the realization of its young hero that life is a struggle – not just for him — but for everyone,  old and young alike.

The Inevitable Defeat of Mister and Pete – Official Trailer