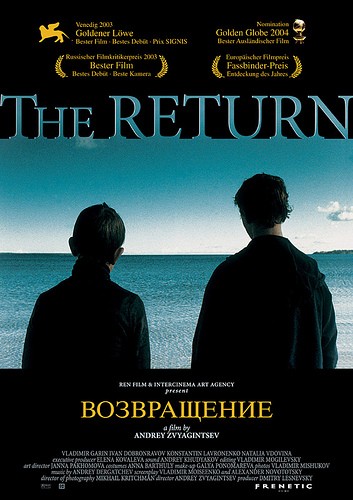 The Return ( original name Vozvrashcheniye) is a powerful Russian psycho drama. Its one these movies for which you do not think much while watching – but rather after seeing them. The excellent cinematography is obvious and so is the talent of the actors is quite astonishing.

The plot seems simple at first- two boys meet their father for a first time after 12 years absence .No one knows where he has been . He takes his sons on a trip across the Russian wilderness – during this trip the boys face various challenges – accepting their dad and learning about life are just two of them.

The younger brother – Ivan seems to be a bit rebellious – pushing the boundaries at times. But I can not judge him – no one can unless he had similar destiny in life. A relative of mine went through similar experience when at age 15 he moved to Spain to live with his father who he saw after 10 years – and once he told me – ” How can I stay here – I don`t know him” – meaning his father . Now everything is better as they have used to each other now – but it must be really hard to go trough such an experience.

The actors who played the boys succeeded to convey the turbulent emotions they fell. One of the best descriptions of that I found on a comment made by Roland E. Zwick at IMDB and would like to quote it in this review :

“…It is virtually impossible to put into words just how brilliantly the two young actors use their facial expressions to convey a wealth of meaning and emotion. As portrayed by Vladimir Garin, Andrey looks up to his father with a mixture of boyish pride and trembling awe, longing for the kind of male affirmation he has been deprived of all these years. He is desperate to please his father by proving to him that he can perform the acts of manhood that his dad keeps putting forth for him to do. As Ivan, Ivan Dobronravov spends most of his time glaring at the man, his mouth pursed in a tight unyielding grimace of resentment and hate. If I could give an award for the best performance by a child actor in movie history, these two youngsters would be high on my list of candidates. They are that amazing…”