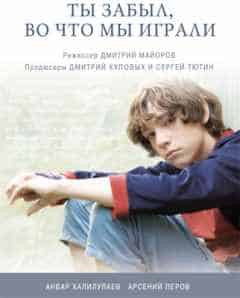 When we reflect on the effects the movies belonging to the Coming-of-Age genre have on our mentality, the yearning for the past and the pleasurable emotions associated with it often plays a central role.  Many Coming-of-Age films share a few common characteristics – one of them the role of time: past, present and future (often embedded in the motives that direct the characters’ efforts). In the Dmitry Mayorov film Have You Forgotten What We Used to Play? (Ты забыл, во что мы играли?) viewers are not only invited to transport themselves back to an earlier period of Russian history, but also to an earlier period in their own lives.

Have You Forgotten What We Used to Play? tells the story of a childhood, of a friendship and of growing up. A young man returns to the village where he grew up and discovers that both he and the place have changed.  Yet, he soon finds himself immersed in his memories. The story of the film is told in a very human, down to earth manner – without any false pretenses. The plot is a bit simplistic, but that is where its beauty lies. Have You Forgotten What We Used to Play? is not one of the sensationalistic movies (most action films and comedies would fall into that group, although there are exceptions),  but it’s filled with artful expression – a tribute to the director’s  childhood (and your own).

The direction and cinematography are exceptionally good for a short movie (but then many short films manage to squeeze in more meaning than some three hour long epics). The melancholic piano accompanying the trip back in time won’t surprise anyone, it being a classic element of the soundtrack for many similarly themed films.  That, combined with elements of The Animals – House of the Rising Sun and Queen’s Invisible Man, certainly inspires nostalgia and fits the essence of the story.

You can watch the full movie below.

Additionally, one year after its premiere, held on September 24, 2010, the director decided to freely distribute the film online. The creators of the movie are expecting to get payback from the exgratia payments from internet-viewers. The official site of the movie is: http://video.finar.ru.  So if you prefer, you may download the film via torrent tracker.  ( AVI version 550MB via Pirate Bay / Standart DVD5 with english subtitles 1.96 GB ).

Have You Forgotten What We Used to Play? is the first film with Creative Commons BY-NC-ND license I have stumbled upon. Yet the idea was not new to me as the French film director, producer and musician, Ivan Noel, mentioned (in the interview he gave for theSkyKid.com) that he is also considering the creation of a site where he will “offer his films (and photos and music) for free!”. Even though these are just incidental projects at the time of the writing this article, I hope that they will be successful and the financial limitations will cease to be a barrier for many cinema lovers (and of course for the filmmakers).