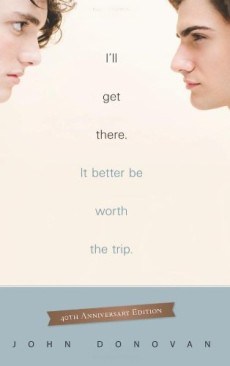 I’ll Get There. It Better Be Worth the Trip

Today I will review a book that was considered controversial when it was first released (back in 1969). It is a book written by John Donovan and has a rather intriguing title: I’ll Get There. It Better Be Worth The Trip. The protagonist of the book is a 13-year-old boy named Davy who has to move from a small town in Massachusetts to New York to live with his mother, after the death of his beloved grandmother who took care of him ever since his parents divorced more than five years before. The boy describes the horrid experiences of losing someone you love and having to adjust to a completely new environment:

“There aren’t many adults I have anything to say to, and now there is one less, with Grandmother dead.”

The only friend who accompanies Davy is Fred, an adorable dog that was given to him as a birthday present by his late Grandmother. In an affectionate voice, Davy shares the many experiences and adventures he and his dog go through. While his mother sees Fred as a “beasty animal”, Davy is positive that the dog understands his every word.

Davy’s mother works as an advertising agent and is not used to having kids around; even her own son irritates her. The fact that she has developed a problem with alcohol makes things even worse for the young teenager. She is constantly after the boy, telling him how her life is being wasted because of him:

“She says I can run away with my dog all I want, but that when I come home I will be coming home to Mother, and I’d better not forget that because it’s Mother’s life that is being wasted …” 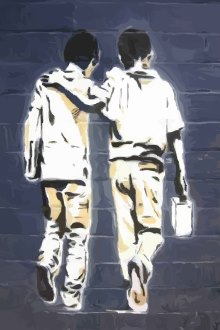 At the new private school in Manhattan to which Davy is sent (despite the fact there is an abundance of public schools near the snotty apartment he shares with his mother), Davy meets Altschuler- a boy who despises Davy at first (because the new kid has taken the place of his best friend who is sick with leukemia and has had to stop attending school). Altschuler is a popular kid at the school and doesn’t lack confidence, which Davy (while mature beyond his years) is still to attain. So the boys’ relationship is off to a rocky start, but it soon develops in an unexpected direction…

As I mentioned, the book was considered controversial for its time due to its subject matter: a Young Adult text that addressed attraction to the same sex. Yet, as much as I’ve tried, I can’t get myself to label the book controversial as it focuses more on Davy’s growing up experiences than on the discovery of his sexuality.

I’ll Get There. It Better Be Worth the Trip is a Coming-of-Age novel, but its narrative cannot be categorized as a “Coming-Out” book. For one thing, the relationship between Davy and his dog would make the novel a better fit for  animal lovers (is there a boy who doesn’t love his pet?). But while the book is not controversial, it features an engaging first person narrative coming from a boy who has been emotionally repressed following the demise of his favorite Grandmother. Davy’s remarks about the people that surround him are witty which makes for a satisfying reading experience:

“When people try to hide things from you, they shouldn’t be nice to you. They ought to ignore you or throw a pie at you or do something other than smile …”

I, for one, found it extremely easy to associate with Davy and his experiences (some of which I have been fortunate or unfortunate enough to share) and kept rooting for him to settle in that new environment and find a real friend. For a book written more than 40 years ago, I did not find it dated – which makes it timeless, even if I’d hesitate to call it a Classic. It took me a while to understand why Davy was living with his grandmother and where his parents were,  but once he moved to New York things started to make sense.

I read this book in the course of three days, finding myself thinking about its story even while I was not reading it, which I guess evidences how interesting I found it. As a Coming-of-Age account,  the book is good — not one of the best I have read — but definitely not a disappointment.

Get yourself a copy of I’ll Get There. It Better Be Worth the Trip