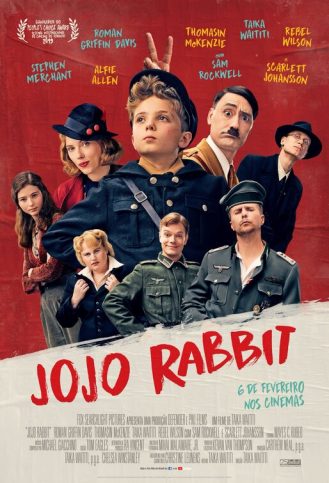 Ten-year-old JoJo (Roman Griffin Davis) has aspirations to be the best Arian member of The Hitler Youth. Living with his mother (Scarlett Johansson) in 1940s Vienna, JoJo is an impressionable boy, and what sets him apart from the rest of the aspiring youngsters to be good Nazi’s is his imaginary friend – not a funky looking animal or alien – but Adolf Hitler himself.

And if that isn’t enough, young Jojo discovers that his family is hiding a Jewish girl in the attic (although she lacks the horns he expects to see in order to tell Jews apart as he has always imagined).

The soundtrack, and its juxtaposition with the most satirical representation of Nazi society, turns what could have been regular documentary footage into an amazing backdrop for the story of young JoJo. There are some funny parallels between the German training camp JoJo attends at the beginning of the story and your average kids’ summer camp in the US – a satirical yet funny way to show how kids are both having fun and being prepared for the future roles that they will have in adult society.  It is this satirical view that makes the story narrative much more original than anything you have seen recently while, at the same time, the film does not sink into absurdity and sneaks in a real plausible mindset and thoughts of a young boy growing up surrounded by propaganda and adults’ ideals.

As original as the narrative is, it’s the time period in which the action is set and some of the happenings and motives in the film that bring back reminders of other Coming-of-Age films. This is especially true for young Jews hiding to survive, with people putting their own lives at risk by helping them or just a child’s perspective of the war behind the front lines. Some titles that come to mind are Brian Percival‘s The Book Thief and Søren Kragh-Jacobsen‘s The Island on Bird Street (1997).

What sets JoJo Rabbit apart is the wonderful casting. All the actors, their interactions, and dialogue greatly contribute to the overall appeal of the film. It’s hard to judge JoJo for his beliefs – seeing his enthusiasm and innocence shining through the facial expressions and eyes of the young Roman Griffin Davis. Hitler is played by Taika Waititi himself – in what is probably the most ridiculous and bizarre portrayal of a historical figure ever, while Thomasin McKenzie brings out heroism in a special way in her characterization of a Jewish girl in hiding. Some of the most heartwarming scenes in the film – both funny and sad-are related to JoJo and his mother’s interactions – portrayed by Scarlett Johansson. I was mostly impressed by her dance skills, but her character is intriguing on so many different levels.

Taika Waititi has significant experience directing young actors – and fans of the Coming-of-Age genre will recall his films Hunt for the Wilderpeople (2016) and Boy (2010). Admittedly I’m not a big fan of the mentioned titles, but Jojo Rabbit completely blew me away with the ingenuity and originality of the plot and the finale – which did not disappoint.