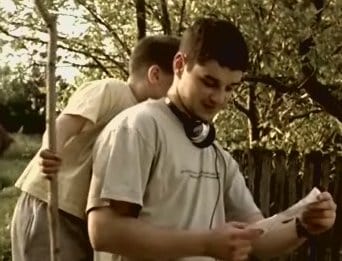 Milan is a short film produced in Yugoslavia.  The action takes place during the 1999 Nato  air-raids of the country. Milan, a six year old boy, lives with his older brother and parents in a small village near Belgrad. The two boys play together and life seems trivial as trivial as it can be having daily air strikes at the nearyby  capital .Ognjenpromises his little brother that he would play “hide and seek” in the afternoon and Milan gets to the meeting point in the forest on time.

He is completely unaware of the fact that his older brother had an accident and is fighting for his life in the hospital. While Ognjen is struggling to survive, Milan starts looking for him, but instead of finding his brother, he finds someone else: an American pilot hiding in the woods after his plane went down… .

The movie also focuses on  the reality of war – a reality which is often blended by the media propaganda. The focus is mainly on the effects of war on innocent civilians.When I was in high school at the US I was surprised that there were people in there who did not know that Serbians were going outside with a target posters – saying that they won`t up to any aggressor . I had my share of arguments with teachers from my school – who of course thought of the military actions in Serbia as liberating – I still fair to understand the whole ” War for peace thing “

The story of the film is well written and developed  .It  has its fair share of   surprising turns which makes the film pleasant to watch for its entire 22 minutes.The actors speaks in Serbian –  but one can follow the dialogue with the English subtitles provided.