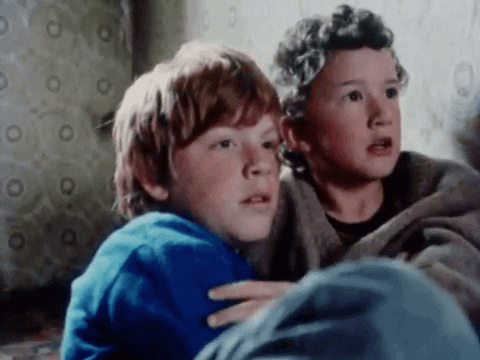 By the 1980s there were kids’ shows on TV on Saturday mornings and the traditional cinema matinée was dead. The Children’s Film Foundation was on the rocks. The unkindest cut must have been that no one really missed it. The quality of television drama aimed at their target audience had risen exponentially during the 70s; the reels of Blytonesque japes that had once drawn pre-teens in droves to the box office now looked tired and formalistic. 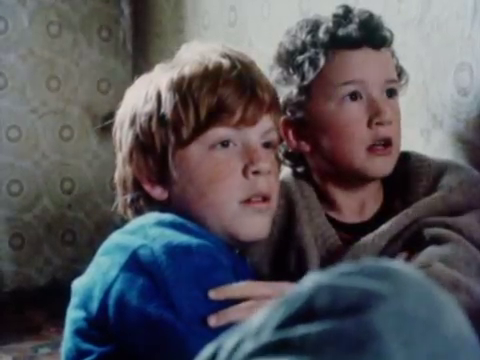 If the CFF was to survive, then they had to up their game. In a series of 80s made-for-television films they did just that and, of the ones I’ve seen, Out of the Darkness is by far the best.

I’ve described it elsewhere as possibly the greatest kids’ horror film ever made. I say that in the context of its being a 1985 TV movie, of course: they had neither the funds nor the technology to make The Spiderwick Chronicles.

Given the available resources, though, this is a jolly good show, chaps!

A ghost story set against the stunning backdrop of the Derbyshire Peak District, Out of the Darkness is Stephen King for kids – and seriously spooky.

The Neil family have inherited a run-down cottage near the isolated Derbyshire village of Eyam. Mrs Neil, her children, Mike and Penny along with their friend Tom travel down to check it out. Tom immediately feels a strange connection with the derelict house. Soon he starts hearing disturbing voices, including that of a young boy desperately crying out to him.

That night, Tom sees a boy in the garden. He looks distressed – and why does he have a bell around his neck?

Mike and Penny tease Tom about all this, putting it down to his over-active imagination, until Penny, too, starts having unnerving visions, leaving Mike strangely out on a limb.

The back-story is a historical fact

All the more creepy is that the back-story is historical fact, making the tale educational to boot.

Technically speaking, this is not a great film. It’s palpably low-budget and only the timelessness of the Derbyshire scenery saves it from looking more dated than it does. The inexperience of the young cast members shows through too, though that somehow adds to the charm of it. None of them aspired to a career in acting (though Gary Halliday [Tom] went on to become a film director). They were just regular kids who, thankfully, had authentic accents. It would have ruined it to have plummy-mouthed drama-school luvvies trying to “sound like wot they do oop north, like,” (a mistake the CFF made in several previous productions.)

The adult performances are all strong, though, and the cinematography exploits the remarkable location to the full.

What makes this gem outstanding for me is the way the story draws in the audience and demands a connection with the characters – Tom in particular, much as he feels connected to the mysterious ghost-boy. It’s hard to define how it manages this, but that’s why it sends such a shiver down the spine when he ends up in paranormal trouble.

I was about 10 when I first saw Out of the Darkness and it was looking rather creaky even then. But that didn’t matter: for me it was an unforgettable experience. Even now, watching it through a critical adult eye, I find it an awesome production. Having discussed it on online forums in my search for a good copy, I have discovered that I am far from the only one who feels that way.

Clip from Out of the Darkness

John Hoyland’s novella The Ivy Garland, on which the story is based, is worth reading too, but see the film first to dodge the spoilers.

I’m sure it won’t work for everyone, but if you like the concept then I strongly recommend you give this film a try.

After years of unavailability, Out of the Darkness is now on sale to European (Region 2) customers as part of an inexpensive CFF box-set called Scary Stories on Amazon UK. North American viewers may have to be more creative in their search. 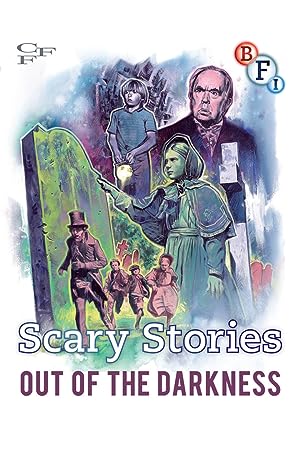 Out of the Darkness (1985)
68 min|Fantasy, Thriller|N/A
7.0Rating: 7.0 / 10 from 71 users
In an English village, three youths see the spirit of a child who died in a 17th-century plague epidemic. They decide to learn about the town's history to find out how they can help set the child's ghost free.
Director: John Krish
Creator: John Krish
Actors: Gary Halliday, Michael Flowers, Emma Ingham
Previous articleBelieve (2013)
Next articleA Boy Called Dad (2009)

Facebook
Twitter
WhatsApp
A low budget but remarkably engaging family-friendly horror film.Red RodentOut of the Darkness (1985)
TheSKyKid.comYoung talent in the movies and the arts