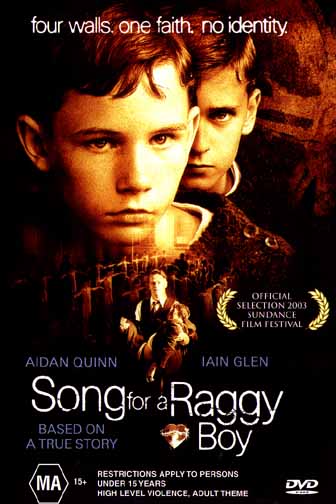 I watched this movie with tears in my eyes. No other movie up to my writing this review made me feel such pain – almost physical pain — just from watching the story that unfolds on the screen. I must note that this was probably the hardest movie to watch from all I have seen until the present at the risk of repeating myself.

I made a few notes when it started – they were about the interesting characters, the song by Libera I noticed – but now I can not really write about that. Shocking, painful, cruel, realistic to the core – I can go on like this for a long time. The fact that Song for a Raggy Boy is based on a true story contributes to the powerful effect on its viewers. 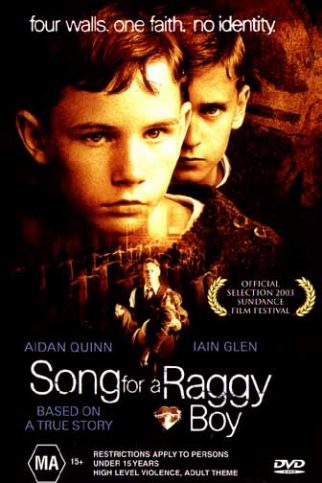 characters in person. The young actors were compelling, and I felt Patrick Delaney (played by Chris Newman) and Liam Mercier (John Travers) were almost like my friends.

But let me tell you a bit more about the movie…

It is set in a reformatory school in Ireland run by the Catholic church. As often happened, the boys sent there didn’t find anything remotely resembling help and support. Instead, they were beaten and abused mentally and physically (some even sexually) by the religious staff there. One of them, Brother John (Iain Glen), the prefect of discipline at the school, is most aptly described by a line with which he tells the new teacher, William Franklin (Aidan Quinn – with a performance that superbly leads the adult cast) about the kind of job he is expected to do:

“The creatures you are going to teach are not to be confused with intelligent human beings.”

Just that line itself was enough for me to imagine the horrible manner in which the boys were treated. The new teacher attempts to change all that and, as the story unfolds, I began to really like him. He was strict but, at the same time, obviously caring for the boys he taught. Brother John becomes his enemy almost from the very beginning. After failing to persuade the institution’s superior to dismiss the new teacher, he directs his anger to the school pupils. You will have to watch the movie to find out how it all ends …

This movie gets 10 out of 10 for me – since it is surely one of the best ones I have ever watched.


Watch the trailer below: