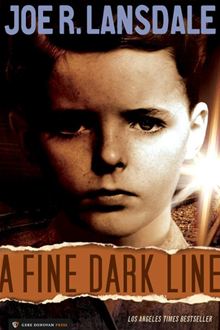 I discovered A Fine Dark Line by Joe R. Lansdale in a list by Corey Smith at Amazon.com that featured Coming-of-Age Horror/Suspense novels. It’s a story told in the first person by its 13-year-old protagonist, Stanley Mitchell. This book grabbed me from the very first pages – not with scary deeds or happenings — but with a genuine and poignant description of Stanley’s boyhood experiences.

“At thirteen years old, I was the youngest of the Mitchell clan, and not a sophisticated thirteen at that. I was as unaware of the ways of the world as a pig is of cutlery and table manners. I thought sex came after the number five and before the number seven.”

Instead of horror, the novel turns out to be a suspenseful mystery when Stanley discovers a buried box of old letters in the forest near his house. The love story in those letters is tied to a murder, a ghost mystery which attracts the young teenager like a magnet. His investigation leads him to great adventures.

The action in A Fine Dark Line takes places in a small American town during the 1950s. Lansdale’s novel feels like a period piece thanks to the description of the culture, society and customs of the time, as seen through the eyes of a young boy. It’s a timeframe in history where Stanley faces issues such as segregation, social class oppressions, religious prejudice, violence and sexual identity.

“The colored knew their place. Women knew their place. Gay was still a word for “happy.” Children were still thought by many as best seen and not heard. Stores closed on Sunday. Our bomb was bigger than their bomb and the United States Army couldn’t be beat by anyone. Including Martians.”

The spirit of the 50s — its movies, music, comics and books –comes to life from the pages of A Fine Dark Line. Despite the serious issues addressed in the book,  the narrative is filled with humor, which greatly enhances the reading experience. It is not pretentious humor, full of forced jokes. Rather, what comes across are the sincere thoughts of  a young boy making sense of the world that surrounds him:

“Getting any smarter, grease stick, getting any smarter?” Chester’s IQ didn’t seem to be rising, but his voice had certainly jumped some octaves. After about five minutes of slapping, it reached the level of the tenors in the Vienna Boys Choir, only less melodious.”

One is drawn to favorably compare this book to the Hardy Boys series (which are mentioned more than once within this story) or to Stephen King’s The Body or Harper Lee’s masterpiece To Kill a Mockingbird.

Although the pace dwindled somewhat about mid-way through, which is attributable to the transition from a pure Coming-of-Age narrative to a suspenseful-action packed mystery, one is unlikely to get bored. I finished the novel in a day and really enjoyed reaching the final resolution along with the young protagonist.