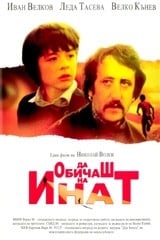 Although I have seen the movie many times, to write this review I have watched it once again and I must say that again I found it interesting. I generally do not like watching movies a few times, but this is one of the few movies I can watch again and again.

In general, the story of the movie is about 14 year old Plamen (Ivan Velkov) and his father Rado (Velko Kynev). Rado Peshev is 40 years old, and has worked as a truck driver delivering fruits and vegetables. He has a 14 year-old son,Plamen, and a good wife. Plamen accidentally learns that his father is involved in illegal transactions. An incident at school confronts the family with the issues of fairness and compromise and causes Plamen to run away from home. Because of this, Rado decides to withdraw from his illegal operations. But it turns out that it is not so easy to get out of the “game”.

At the beginning of the film, the father gives his son a lesson: “if you are right, keep faith til the end”. This is the main idea of the film.  You must, at any cost, defend the truth regardless of consequences. Is it normal to require that you  be honest if all others around you are not?

The main conclusion of the film is that the truth is most important and you must have faith in it because, in the end, it is all you have. You may not make compromises with it to serve an individual or authority.  Defending the truth  is a sign of both civic and personal courage.

The actors  in the movie bring their roles to life at an incredibly good level.  The same applies to the direction of the film and work with the camera.

The movie has won various awards for cinematography, the Critics Award, an award for best director, and the best actor prize. But maybe the most prestigious of all awards is the Special Jury Prize and the prize “Don Quixote” of the  International Film Festival, Karlovy Vary, 1986 .

In the end, this is and will remain one of my favorite movies. It is one of the proofs showing that, although communism inflicted enormous damage to the whole of Bulgaria and Eastern Europe, this region (Eastern Europe and Bulgaria in particular) had, and still has, something to show to the world.

According to the film`s IMDB page Da obichash na Inat was also released in Finland and Sweeden under the titles :

This is a guest review by Spooky. Read his author`s note below :

This is my first movie review.  In it I present to you one of my favorite coming of age films — one that perhaps few people know about because it was  filmed in 1986, in then communist Bulgaria. I asked SkyKid to publish this review in his blog and he gladly agreed. If you liked this review, I will write others about  various unfamiliar but noteworthy Bulgarian and East Europe movies in the future.