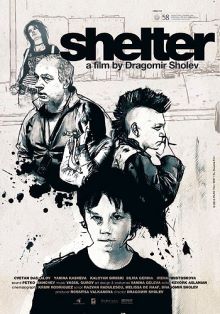 The gap between generations is the main theme of the 2010 Bulgarian film Podslon (Shelter). Unless you have attended a festival where the film has been shown, it’s highly unlikely that you have heard of the movie, which is a shame as it is one of the few Bulgarian films with a Coming-of-Age narrative released after 2000.  No DVD is available either – especially none featuring English subtitles, which makes one appreciate the value of peer-to-peer networks that allow such intriguing works of art to reach their audience.

The plot in Shelter is simple (maybe overly simplistic) and tells the story of Radostin (Kaloian Siriiski),  a young boy of 12 who disappears after his mother allowed him to attend a sleepover party. The preoccupied parents notify the police, but when the father returns home loud punk music announces that his son has returned…and he is not alone; an unknown girl is taking a shower. A few moments later the irritated father is calmed by his wife who is happy that their son has returned safely and is willing to forgive anything.  The doorbell rings and, when the father opens the door,  a young punk rushes in announcing that he has brought drinks… (as in the alcoholic type). The girl in the shower and the punk are introduced by Radostin as his friends and, since it is raining outside, they decide to accept Radostin’s mother’s dinner invitation.

For the rest of the film, viewers witness a clash of generations as Radostin’s father learns that his son’s friends smoke, drink and believe in anarchy.  And worst of all,  his son looks at them as role models ….

Although the film was released in 2010, the directing style and its cinematography make it appear like some of the classic Bulgarian films released prior to 1989. An abundance of long shots, combined with hand held camera usage, realistic settings [both interiors (where most of the action takes place) and exteriors], and wonderful performances by the entire cast combine to produce an excellent film.

One of the things that you won’t notice, however, (though it’s interesting to know) is that a girl plays the role of the young punk boy in the film. The actress, Irena Hristoskova, embodied her character so well that I admit that if I hadn’t noticed her name in the IMDd listing of the film, I would have never suspected that. Her character is the most memorable of the whole film and somehow makes one understand why the 12-year-old Radostin wants to be like his older punk friend – cool and free of all restrictions.

While the plot is simple, it did made me recall my own childhood. I watched it with my mother — who commented that when I was at the age of the young protagonist she let me do whatever I wanted and my dad never said anything. It is true that in the years when one struggles to define his personality, he is like a sponge to all ideas and things that appear cool and defy the rules and authority that set boundaries at school or home. Rebellion seems to be a natural part of growing up. The old saying “tell me who your friends are so I can see who you are” holds true. Yet I am unable to label as antagonists any of the characters in Podslon – different generations, different values …who is to be the judge ….?

Official site of the film

Previous articleAlex Ko: From Iowa to Broadway, My Billy Elliot Story — A Book Review
Next articleSharp Turn Ahead: an impression