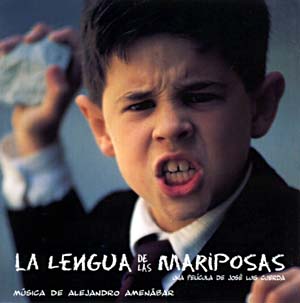 As a fan of the coming of age genre, I knew that La Lengua de las Mariposas wouldn’t disappoint me. The Spanish film was recommended to me by several people and everyone guaranteed that a review of this film has the potential to become one of the most read articles .

I have read many reviews of the film, before and after seeing it, and found that many authors compare it with such classics of the coming of age genre as the Italian Cinema Paradiso (the central youngster/father-figure relationship, as well as some of its bittersweet nostalgia) or the Czech film Kolya. It can also be compared with the Swedish My Life As a Dog or François Truffaut’s The 400 Blows, as the story is told from a child’s point of view and depicts  the more contemptible aspects of human nature. I also noted similarities between La Lengua de las Mariposas and another Spanish masterpiece, Secretos de Corazon, considering that most of the film is carried on by a young and quite sympathetic protagonist. In fact,  Michael Thomson wrote a very good description of the young actor’s talent in his review for BBC published on 26 July 2000. In it he said:  “Manuel Lozano, as the seven-year-old, is particularly powerful when he has to do more than just look anxious and cute (his cuteness loads the dice too much)” source. The relationship with his older brother is another reference to the scenes of Secretos de Corazon.

The film’s drama is developed from a series of short stories by Manuel Rivas. Its main protagonist is the seven year old Moncho (Manuel Lozano)  –  a young boy growing up in Spain during the mid-1930s. He has asthma and has to carry with him an odd device which makes his first day at school even harder. He has heard rumors that the teacher may punish the pupils by hitting them, which results in a sleepless night before the first day of school. On the morning of his first school day he is nervous, but soon finds out that there is nothing to worry about.  Don Gregorio (Fernando Fernán Gómez), the teacher he is assigned, respects the pupils in his class and is able to gain their attention without corporal or verbal punishment. Moncho’s little world suddenly opens up, and he becomes very close to his new teacher. From that moment on, the movie concentrates on Don Gregorio’s nurturing relationship with Moncho, and on Moncho’s first hints of coming of age.

Soon after his first experiences at school, Moncho gets to learn about life from another source – when he and an older schoolmate spy on a couple while they are making love. Up until this moment, the film projects itself as an account of childhood. As with Secretos de Corazon, the viewer is thinking that there won’t be much more development of the film and one can sit back and enjoy the coming of age experience of Moncho. This might have been it, if the Spanish director did not have an intention to show that one’s childhood is never quite the candy-coated state of bliss one may be familar with from a variety of American Disney-type flicks.

An unexpected, but powerful, shift in the political situation of Spain changes Moncho’s world. In light of the new circumtances, he becomes scared and confused – and his state of mind is reflected in his eyes. The eyes of the boy reflected the spirit of the time and the things he could not yet understand. The eyes of many of the characters, in the Spanish films I have seen, tell as much of the story as the plot itself and La Lengua de las Mariposas is one of them. In order to select Manuel Lozano for the role of Moncho, the director had to audition more than 1500 kids and, once Manuel was discovered , the director called him “a genius of interpretation”. I have absolutely no doubt that you will agree with that, once you see the film and Manuel’s performance.

The film’s targeted audience is young adults and adults , but I also believe that younger children would benefit greatly from seeing the film. Matt Heffernan wrote in his review of  La Lengua de las Mariposas that the film is suitable for those who can recognize that childhood represents more than a time of growth. It is the only time in a person’s life in which he can act and think totally without prejudice.source

I saw this film with my parents and the three of us liked it a lot. Therefore I have no hesitation to recommend La Lengua de las Mariposas as one of the best coming of age flicks I have seen. It is well directed, with beautiful scenery and is well acted all over. La Lengua de las Mariposas is a pleasure for the senses while, at the same time, giving the viewer a glimpse of Spanish history and a lot of ideas to think on. The director’s comentary included in the DVD is quite interesting and I do recommend that you see it as well.

This review is included in the book Coming Of Age Movies: Growing Up On Screen

Previous articleCross My Heart and Hope to Die
Next articleSingle Santa Seeks Mrs. Claus: Great Film For The Season