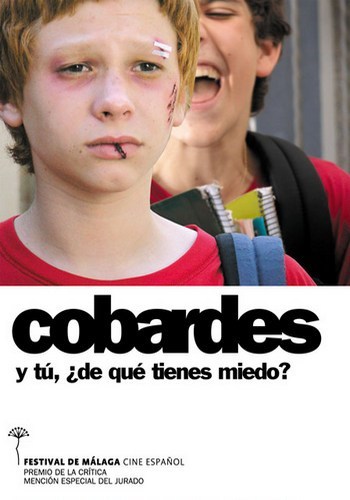 an eye for an eye, a tooth for a tooth, a hand for a hand, a foot for a foot

If someone strikes you on one cheek, turn to him the other also

Which philosophy are you more likely to follow? And will you think the same after seeing the Spanish Coming-of-Age  film Cobardes (Cowards).…

Cowards is an excellent drama focused on violence at school — better known as bullying.  And bullying, as we know, is mostly popular among teenagers.  The protagonist in Cobardes is the 14-year-old Gaby (Eduardo Gare). He is a shy boy and his ginger hair makes him stand out from the rest. But it becomes one of the things his classmates like to tease him about — calling him “Carrot”.

Gaby has to withstand much more than verbal abuse and, unable to share much with his parents (both so hard working that the family has to have dinners in a restaurant), he decides to retreat into himself. The bully, Guille, and his gang – could not be happier, as they cause Gaby to fear them.

The story begins to evolve when Guille’s mother finds a video clip filled with violence on his mobile (a reminder of the video recordings and the YouTube phenomenon). She erases the clip – and decides not to tell her husband at first, but warns her son.  He naturally denies everything and even manages to present himself as a victim of Gaby when speaking with the school psychologist later in the film.

The movie can be classified as a psychological drama as it touches important issues such as personality development of children, peer relationships, the constraints of teachers and psychologists, and the role that the attitude and personality of the parents play in the upbringing of their kids.

I experienced my fair share of bullying at school – the bully never acted alone – which I guess is a common trait for such persons. In my case, it was a boy who was making fun of me for being a fan of Hanson and, after I struck back in the school hallway, he gathered a gang of about twelve persons to wait for me after school (which is quite cowardly). On that day, I did not have any other option than to run away – giving them the pleasure of chasing me. The next day my classmates were with me most of the time – which I guess must have scared him away. But in any case,  he did not manage to gather his gang again and was unwilling to attack me by himself. This experience of mine reflected the way I interpreted the film.

Cowards shows a perfectly realistic reflection of society today and the way in which the story is presented is quite appealing to a young audience. The cinematography reminded me of the one I am now used to seeing in Scandinavian films – vivid colors, innovative montage, creative photography and vibrant and consistent staging.

The acting in the film was good – especially that of the young cast.  Because of that, in my opinion, one gets to know and care about the characters early in the story.

The biggest criticism of Cowards is the amount of clichés in the plot. But keeping in mind the film’s theme, I think that those clichés are hardly avoidable and, in any case, the unexpected ending makes up for all of them.

Cobardes is an excellent Coming-of-Age drama focused on violence at school better known by its proper term - Bullying.
3.3
Where to get
Amazon