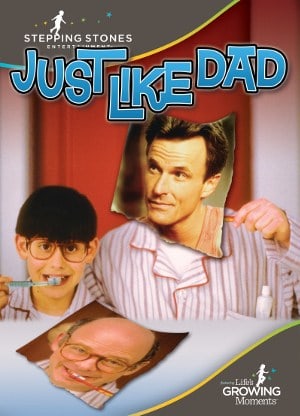 The 1995 American film Just Like Dad does not shine with an original or poignant storyline, yet its easy going family-friendly nature turns it into a perfect choice for a laid back Sunday afternoon. Made for TV and directed by Blair Treu, the movie tells the story of twelve year old Charlie (Ben Diskin).

Charlie’s small stature and wimpy looks turn him into an ideal target for the school bullies, and while he is not the only kid being bullied (his best friend Sherwood (Jarrett Lennon) is frequently subjected to similar treatment), he is desperately seeking a way out. Unfortunately for Charlie, his dad (Wallace Shawn) is a nerdy scientist, bullied on his own by his colleagues at work. His dad’s solution is to pay the bullies so they will leave him alone.

Seeing no other solution for his problems, Charlie decides that the only way to achieve a better status at school is to win the father-son completions at the next school picnic. As his own dad is anything but athletic, Charlie decides to recruit a pretend father from the local bodybuilding club as a substitute. He is successful in that undertaking, but then things do not go exactly as planned.

The film does include Coming-of-Age motifs and with a good moral lesson (even if it feels bit forced on the audience), but probably its best feature is the acting performances.

Most notable are the performances of Ben Diskin and Jarrett Lennon (both actors are charismatic and interact well with each other). Although the film is categorized as comedy or melodrama, it doesn’t feature that many funny or melodramatic moments. And, when it does, they are of the light kind. This does not necessarily turn it into a bad flick as it manages to remain entertaining and never bores its viewers. Added bonuses are the scenes with computer usage, as the technology appeared so “advanced” in 1995 — not!

Just Like Dad is not likely to leave long-lasting memories in its audience, but it’s a good way to chill out in front of the TV. Young kids may also find it entertaining, as some of the scenes are shot with a naivety that I’m sure will appeal to them. 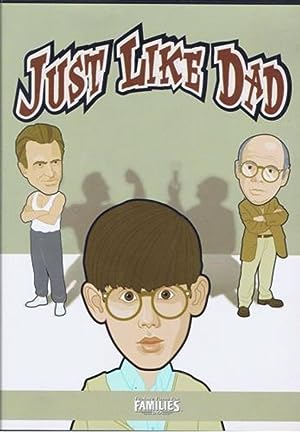 Just Like Dad (1995)
101 min|Comedy, Drama, Family|04 Nov 1996
6.0Rating: 6.0 / 10 from 464 users
Charlie is constantly bullied at school and decides to invite a weightlifter to pose as his father at the father/son picnic. The lie spirals out of control and Charlie ends up the target of a kidnapping due to the weightlifter's t...
Director: Blair Treu
Creator: Wayne Allan Rice
Actors: Wallace Shawn, Ben Diskin, Nick Cassavetes
Just Like Dad (1995)
Summary
An easy going family-friendly flick that turns into a perfect choice for a laid back Sunday afternoon.
3.2
Our score
Get the DVD
Amazon.com
Previous articleReinventing Marvin (2017)
Next articleBoarding School (2018)

Facebook
Twitter
WhatsApp
Just Like Dad (1995)An easy going family-friendly flick that turns into a perfect choice for a laid back Sunday afternoon.
TheSKyKid.comYoung talent in the movies and the arts